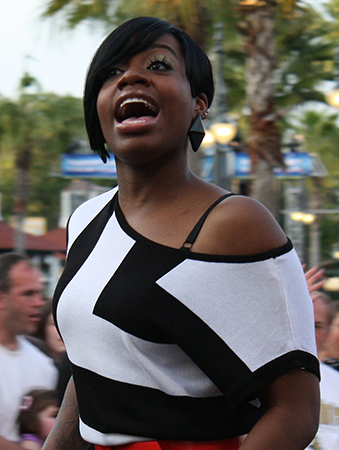 R&B singer Fantasia Barrino was born June 30, 1984 in High Point, North Carolina. She attended Andrews High School in High Point until she dropped out at age 16. After that, Barrino lived briefly in Greensboro before appearing on the television series American Idol.

Fantasia Barrino rose to fame in 2004, winning first place in American Idol’s third season. Since her Idol victory, Barrino has released five albums: Free Yourself (2004), Fantasia (2006), Back to Me (2010), Side Effects of You (2013), and The Definition Of (2016).She won a Grammy award in 2011 for Best Female R&B Vocal Performance for the song "Bittersweet", after six previous nominations.

Barrino took a brief hiatus from recording music after her sophomore album to explore acting and writing. She played Celie Johnson for almost a year in the Broadway production of The Color Purple, based on Alice Walker’s Pulitzer Prize-winning novel.  Barrino will also play Celie Johnson in an upcoming film adaptation.

Barinno wrote and published Life is Not a Fairy Tale in 2005, a personal memoir  of her life. The Lifetime Network adapted this memoir into a 2006 television movie, Life is Not a Fairy Tale: The Fantasia Barrino Story. Barrino played herself in this movie and was nominated for a 2007 Image Award for Outstanding Access in a Television Movie, Mini-Series, or Dramatic Special. She was also nominated for Female Choice Reality/Variety TV Star at the 2004 Teen Choice Awards for her performance on American Idol. Fantasia continues to star in her own realty television show on VH1, Fantasia For Real.

Barrino has two children, and continues to pursue a career in R&B music and acting.