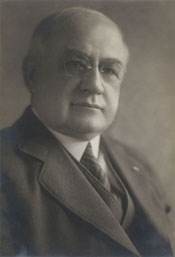 Charles Laban Abernethy, congressman and lawyer, was born in the town of Rutherford College, Burke County. His father, John Turner Abernethy, was the son of Robert L. Abernethy, the founder of Rutherford College. His mother was the former Martha Scott. After attending public elementary schools and Mount Olive High School, he entered his grandfather's college where he prepared for a law course at The University of North Carolina. In 1893 he founded a weekly newspaper, the Beaufort Herald, which he published until he decided to concentrate more fully on the practice of law. After being admitted to the bar in 1895, he opened a law office in Beaufort and for many years was the only lawyer in Carteret County. He served as city attorney for two years. A member of the state executive committee of the Democratic party from 1898 to 1900, he was a presidential elector in 1900 on the Democratic ticket of Bryan and Stevenson, at that time the youngest person ever to have sat in the electoral college. He was an elector again in 1904 on the ticket of Parker and Davis. Upon being appointed solicitor of the third (later the fifth) judicial district, he moved to New Bern in 1913. He served as solicitor for twelve years and then practiced law until elected in 1922 to fill the unexpired House of Representatives term of Sam M. Brinson, who had died in office. He was reelected to a full term in the Sixty-eighth Congress and to five additional terms, until defeated by Graham A. Barden in 1934. He resumed the practice of law in New Bern in 1935 and unsuccessfully tried to regain his seat in Congress in the elections of 1936, 1938, and 1940. Retiring from his law firm in 1938, he remained a resident of New Bern until his death.

Abernethy's greatest contribution was his early and persistent advocacy of an inland waterway. Laboring long and hard for his project, he was one of the principal spokesmen for the Intracoastal Waterway that was eventually established. His article "Has North Carolina Kept the Pace?" published in the August 1927 Southern Advertising and Publishing, promoted the waterway and included numerous statistics indicating the economic and industrial growth his state was then experiencing. He was instrumental, as well, in having Fort Macon returned to the people of North Carolina. Then Abernethy, as a member of the House Appropriations Committee, secured funds for the construction of a federal building to house several government agencies with offices in New Bern. His success in raising the funds was seen as a major victory accomplished despite the opposition of President Hoover's Republican administration and the onset of the Depression; hailing the funding as a notable political feat, Will Rogers commented that his home town of Claremore, Okla. could also get a building costing $3,000,000 if Abernethy were its representative. New Bern further profited from Abernethy's influence when he persuaded the government to locate a customs office there.

Abernethy was a member of numerous fraternal orders, including the Elks, Odd Fellows, Red Men, Woodmen of the World, Kiwanis, and Knights of Pythias. He was master of the Franklin Masonic Lodge in Beaufort, a Knight Templar, and a member of the Sudan Shrine Temple in New Bern. An active Methodist layman, he organized the Deems Bible Class of Centenary Methodist Church in New Bern and often commuted from Washington to conduct the class on Sundays.

Abernethy suffered several nervous breakdowns and was hospitalized first in 1920 and intermittently thereafter until 1942, when he became a patient in the state mental hospitals of North Carolina until shortly before his death. His condition, which prevented him from attending the Democratic convention in Chicago in 1932, was made worse in the following months by the special session of Congress called to consider economic conditions at the height of the Depression and by the heavy workload he carried as a member of the appropriations committee at this time of economic crisis. His failure to regain his seat in Congress also contributed to the increasing mental instability that eventually resulted in his commitment to state institutions in Raleigh and Butner. After his release, he returned to New Bern and lived quietly for two years until his death.

Married to the former Minnie M. May of Pitt County on 19 Dec. 1895, Abernethy had one son, Charles Laban, Jr., a lawyer in New Bern who became his father's legal guardian. Abernethy is buried in Cedar Grove Cemetery in New Bern. A portrait, presented by his daughter-in-law, has been placed in the courtroom of the superior court of the district where he served.

Collection of the U.S. House of Representatives, Photography Collection. From the Biographical Directory of the U.S. Congress. Available from http://bioguide.congress.gov/scripts/guidedisplay.pl?index=a000015 (accessed January 17, 2013).