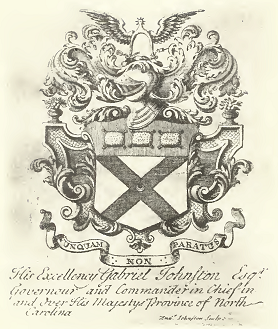 Armorial Bearings were coats of arms, crests, and other insignias formerly borne on shields by knights and later granted by the Crown or other designated officials to individuals, public and local authorities, and corporate bodies such as guilds. Before the American Revolution, persons in North Carolina entitled to bear arms would use a seal to impress their family arms in wax when sealing a document such as a deed or will. Among the surviving examples of documents authenticated with seals are those pertaining to Thomas Harvey (1699) of Albemarle County; William Boyce (1703) of Perquimans County; Frederick Jones (1722) of Chowan County; Emanuel Low (1727) of Pasquotank County; Roger Mason (1752) of Hyde County; and Thomas Symons (1757) of Pasquotank County. Many people used seals depicting only a single object, perhaps from the crest of their arms. For example, Jacob Ternell's seal in 1713 had a swan, Grace Pilson's in 1743 had a watchdog, and James Sumner's in 1750 had a castle.

After the Revolution, coats of arms, except as used by descendants of original grantees, ceased to have any authentic purpose. In the twentieth century prints and drawings of coats of arms, plaques, and signet rings with an intaglio seal began to be offered for sale commercially without regard to descent of the purchaser or entitlement.

Mackenzie, George Norbury. Colonial families of the United States of America, in which is given the history, genealogy and armorial bearings of colonial families who settled in the American colonies from the time of the settlement of Jamestown, 13th May, 1607, to the battle of Lexington, 19th April, 1775. Baltimore, Maryland: Seaforth Press. 1917. https://archive.org/stream/colonialfamilie00rhoagoog#page/n10/mode/2up

The bookplate of Royal Governor Gabriel Johnston, showing his coat of arms. From Hinton, Mary Hilliard. "Heraldry and Its Usage in the Colony of North Carolina." North Carolina Booklet 14. July 1914.