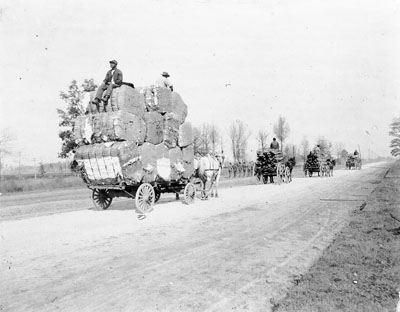 For much of North Carolina’s history, the primary source of agricultural labor for the vast majority of small farms was the farmer’s own family, including small children, whose abilities and productivity grew with age. Indentured servants frequently worked on larger farms and plantations, outnumbering African slaves throughout the colony’s first half century. As the lowest class of whites, these ‘‘Christian’’ servants had voluntarily bound themselves to a master by a written contract for a predetermined number of years to ‘‘redeem’’ their passage to the colony. Also included in this group were people who had been taken against their will: political prisoners, criminals, and other convicts sold into bondage in lieu of incarceration in England. Their length of service depended on the nature of the contract but generally lasted between three and five years. At the end of this period, a servant usually received 50 acres of land from the colony, along with food, clothing, tools, and other farming supplies from the master. Some contracts stipulated that the servant be taught a trade as well as to read and write.The colony enacted laws that prohibited harsh treatment of indentured servants.

As the agricultural economy grew during the colonial period, its progress was restricted by insufficient labor. Indentured servitude was simply not a viable resource because of the limited number of white servants available in the colony. In an effort to mature and expand the fledgling economy, North Carolina began to draw on black slave labor.

The majority of planters who wished to increase their labor supply preferred slaves over free blacks or white laborers. North Carolina’s slave population grew slowly; smaller than that of any other southern colony, it comprised only 25 percent of the state’s inhabitants, compared to 60 percent of South Carolina’s. Slavery was more prevalent in the eastern half of North Carolina because of its fertile soil and amenable terrain; in some counties, slaves outnumbered whites.

It was often difficult for North Carolina planters to determine the number of acres that could profitably be cultivated by slaves, since every planter was an autonomous entity and had little knowledge of his neighbors’ experiences until the last two decades of slavery. Some planters permitted their slave population to increase beyond the point of efficiency, which, consequently, left the slaves with little to do and caused plantations to operate at a loss. Some growers attempted to plant over twice the amount of land that their slaves could reasonably cultivate. According to the Farmers’ Journal, North Carolina’s nineteenth-century farmers were far more likely to understaff their plantations than to amass surplus labor. The Journal believed that North Carolina’s ‘‘low state of agriculture’’ during the last half of the antebellum period resulted from a tendency to cultivate too much land as well as poor management practices.

Free blacks were another source of agricultural labor in the antebellum period, working as day laborers, farm tenants, and farm operators. As farmhands, some free blacks found steady employment and lived on a plantation much like slaves, or they worked only during the harvest season. A few owned slaves and used them in the same way as white slave owners did. The census of 1830 indicates that 192 free blacks in North Carolina owned from 1 to 41 slaves. Many of these black owners had married slaves, hoping later to obtain their emancipation. In 1828 the legislature required planters to pay a poll tax on the free blacks who lived on their plantations, just as they paid on their slaves.

After the Civil War, sharecropping and other forms of tenant farming emerged from the ashes of slavery. In the harsh postbellum economy, sharecropping was a natural choice for landowners without capital to pay wages and for poor black and white families who lacked both land and capital but who could furnish a suitable labor supply. This system allowed planters to maintain their farming operations, to pay for labor with a share of the crop, and to entice workers to remain on the farm until harvest. The tenants’ share varied according to locality and crop, but it generally depended on their contribution to the enterprise. If the landowner furnished farm tools, animals, fertilizer, seeds, a house, and food and the tenant provided only labor, the owner would probably take three-fourths of the crop. If the sharecropper brought his own provisions, he received one-half of the harvest.

Sharecropping in North Carolina extended well into the twentieth century, often leading to debt and impoverishment for a huge number of tenants and their families. White tenants always outnumbered black tenants, but the percentage of whites was less than that of blacks. In 1920, 33 percent of white farmers and 71 percent of black farmers were tenants. A survey of 351 rural families in Chatham County in 1923 found that half of them were tenants, few of whom had running water. In 1929 a University of North Carolina sociologist described ‘‘much that is ugly’’ about rural life: ‘‘Many of our North Carolina farmers are desperately poor, live in wretched houses, and are scantily provided with even the necessities of life. There is poverty, illiteracy, uncouthness, narrowness, and excessive individualism. Tenancy and cash crop farming have failed to provide prosperity, culture, or social unity.’’

Tenancy tended to decrease farm size and efficiency, deplete soil fertility, discourage the use of machinery, perpetuate the one-crop system and crop liens, and inhibit the growth of rural organization and cooperative ventures. However, it continued to thrive well into the 1940s, especially in the Coastal Plain, where good tobacco prices and high land values minimized labor arrangements. As better applications of fertilizer on the most suitable tobacco land created higher yields per acre, landlords increased their tenant units to accommodate increased production. As late as 1954, the tenancy rate in Wilson County remained about 75 percent of all farmers.

With ever-expanding mechanization in the 1960s, the need for agricultural hand labor during the growing season decreased. In time the increased use of labor-saving devices led to an exodus from the farm. A 1929 study of sons and daughters of white farmers in Wake County found that 80 percent chose to stay within a 50-mile radius of where they grew up. As machinery did the work formerly performed by family members, tenants, and hired workers, the rural workforce moved to urban areas. Exhausted or eroded soil caused others to leave the farm.

With tenancy and the farm population decreasing, North Carolina growers used different types of workers and labor-saving equipment. When higher-paying work became available in manufacturing plants, the able-bodied took advantage of a steady income. For a time, farmers recruited youthful urban workers from the area. Throughout the 1970s, both urban and rural youths, black and white, were able to find work on many North Carolina tobacco farms.

By the 1980s and 1990s the agricultural labor system again evolved to accommodate changing economic trends. As young workers found jobs in area businesses and the school year began earlier, the farm workforce declined. Growers often found acceptable day laborers lacking. At this time migrant labor began proliferating in the state; many workers came from Mexico and Central America in search of higher wages and stability. By the end of the twentieth century and the early twenty-first, migrants comprised the vast majority of agricultural laborers in North Carolina.