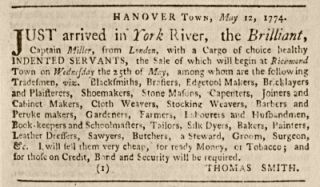 Indentured servants were white Europeans of modest means who for various reasons wanted to go to the British colonies but could not pay the cost of their passage. During the colonial period, a thriving business developed in Europe in which young men and women agreed to work for a specific time in the New World for a master who paid their way across the Atlantic Ocean. The indenture was the contract they signed and carried with them for the length of their service. A typical servant's contract noted the length (usually four to seven years) and place of service, the master's name, and the minimal food, clothing, and shelter that he or she was to provide.

In the eighteenth century, as the servant population grew (although it never became very large in North Carolina), the North Carolina Assembly found it necessary to enact regulatory laws, particularly since the system lent itself to abuse on the part of both servant and master. According to printer James Davis's legal guide, published in New Bern in 1774, runaway servants who were caught would serve double time after the expiration of their contracted term. Servants who resisted their masters could "suffer corporal Punishment, at the Discretion of a Justice, not exceeding Twenty One Lashes."

For their part, masters had to provide their servants with a "Competent Dyet, Clothing & Lodging," and they could "not exceed the Bounds of moderation in correcting them." By all accounts, life for indentured servants was difficult. Many died of disease before the end of their contracts, and most who survived were poor.

i AM TRYING TO FIND OUT IF

i AM TRYING TO FIND OUT IF JOHN PIPER OR HIS SON JOHN WERE INDENTURED SERVANTS IN PENNSYLVANIA BEFORE MOVING TO NORTH CAROLINA AROUND 1756.

We have found that our family

We have found that our family has Australian Aborigine and Middle-Eastern DNA. Our ancestor that was aborigine was born in NC in around 1820. Her father was white (Thomas Goff 1854-1932); but we don't know who her mother was. And family stories of neighbors in the area say that she was mixed, passing for white. To add more mystery to the equation was the story of her union with an "Arab". Both DNA are #1 and #2 on an older relative descendant that I tested. I guess what I'm asking is, is there any known record of any Australian Aborigine and Middle-Eastern (particularly, Oman and Saudi Arabia) indentured servants in the areas of Duplin County, NC in the 1820's - 1860's. The older relative tested is now deceased; but she the only African DNA she had was Egyptian. Of course as an African American family (so-we-thought), we were quite surprised!

Thank you for visiting NCpedia and taking time to share this question. It's a great question!

Apprenticeship is also a labor system.  In that case, a person is bound by a contract to a master to learn a skilled trade.  Apprenticeship could be compulsory (i.e required) in the case of orphans or illegitimate children or voluntary.  Parents might apprentice their children so that the children could learn a trade to be able to support themselves.  In other cases, parents might apprentice a child to a master in order to relieve the family of the burden of providing for food, shelter, clothing, etc.

You may be interested in the NCpedia entry on Apprenticeship:  http://ncpedia.org/apprenticeship