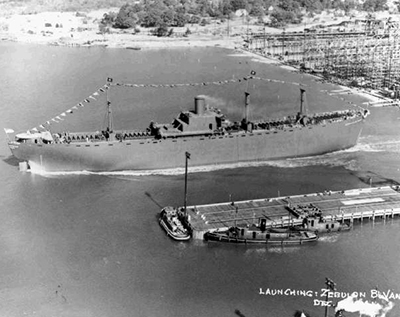 The USS Zebulon B. Vance was launched in Wilmington on 6 Dec. 1941, one day before the Japanese attack on Pearl Harbor. At the ceremony, North Carolina governor J. Melville Broughton proclaimed, "As we salute this ship and launch it today, we shall have a proud part in the overthrow of the aggressor who seeks to dominate the entire world." A few minutes later he and 13,000 other North Carolinians watched the ship splash into the Cape Fear River.

Named for the state's legendary Civil War and Reconstruction governor, the Vance represented the first of 125 Liberty ships built in Wilmington during World War II. The North Carolina Shipbuilding Company, a subsidiary of Newport News Shipbuilding and Dry Dock Company, began constructing a shipyard on the Cape Fear River's east side in February 1941. In 1944 the Truman Committee (created to study defense-related contracts) reported that the North Carolina yard produced vessels at "the lowest average cost per ship . . . of any of the 16 yards building Liberty ships in 1943."

The Vance measured 441.5 feet long and was 56 feet wide at the beam. Its gross tonnage of 7,177 drew 27 feet of water; powered by a 2,500-HP engine, the Vance could reach a running speed of 11 to 14 knots. The ship had quarters for 44 officers and enlisted men but "none for passengers." Construction costs were estimated at $1.5 million.

For most of the war the Vance served as a freighter. It survived floating mines and a near miss by a torpedo and took part in the invasion of North Africa. Near the war's end the Vance was converted into a hospital ship and renamed the USS John J. Meany. After the war it was transferred to the Army Transportation Corps and once again named the Zebulon B. Vance. The vessel was used to convey British and other war brides to the United States.

Vonstrahl, Joyce Bryan. "Horrors on board the Zebulon B. Vance." The American War Bride Experience.  http://uswarbrides.com/bride_stories/jvonstrahl.html

My father worked at the

My father worked at the Wilmington shipyard in the 40's. Where can I find any information regarding name of employees during that time and dates of employment . I recall going aboard to meet a cowboy with his horse, I cannot remember the exact name. Any information available would be appreciated. Thankm you.

Thank you for your comment and for visiting NCpedia! I am forwarding your inquiry over to our library's Reference Team at slnc.reference@ncdcr.gov so that they can assist you further. A staff member from our library will be reaching out to you via e-mail soon!

My mom, a British warbride,

My mom, a British warbride, came to the US on the Zebulon Vance in 1946 with my brother who was 8 months old. They left a port in England and arrived in New York. I would be interested in seeing passenger lists.

My mother came as a war bride

My mother came as a war bride on the Zubulon B. Vance on 5 January 1947 (pregnant with my brother). The ship's manifest is on Ancestry.com

Hello! If they landed it in

Hello! If they landed it in NY, it's possible it went through Ellis Island and you may be able to find information there. I'm not sure a passenger list survived or not and if it did, it may be property of the military. You might want to check with both Ellis Island foundation and also the National Archives to see if there is any information. Good luck!

My Mother was a war bride,

My Mother was a war bride, she traveled from France to New York at age 21 on the Zebulon B Vance. My Mom has passed, however; as a young child told me horror stories of her experience on this ship, finally, yet the happiness arriving to USA on May 20, 1946 as Mrs. Arie Sheperd.

After my father passed away,

After my father passed away, we went through a box of things he had from WWII. One of the items was a bible with a presentation page to "S.S. Zebulon B. Vance Officers Mess Club" from the Hallsboro Baptist Church in Hallsboro, NC. It also had a small piece of paper that had been taped over the ships name with "John J. Meany"; that little piece of paper has been lost. Is there any organization that might be interested in this bible? It really doesn't have any meaning to us and we feel it might have a better home in someplace like a museum.

Thank you very much for visiting NCpedia and for taking time to share this and your question.

You may want to contact both the NC Museum of History and the State Archives of NC to see if they might be interested in the bible. Both institutions have military collections.

Here is the link for the “Donate an Artifact” page for the Museum of History: https://www.ncmuseumofhistory.org/collections/donate-artifact. You will find contact information there.

And here is the military collections page for the State Archives: https://archives.ncdcr.gov/researchers/collections/military-collections. You’ll find contact information there as well.

Thank you again for reaching out with this.

And please let me know if you have any additional questions.

Hi. I'm doing some researches for my estranged US Cousins. Their grandmother went from Le Havre to New York. I'm wondering if she was abroad the Vance in 1946, she has registered under her married name. Mrs Paulette Thibodeaux. I'd say between March and April 1946.

Thank you for your answer.

I arrived in the United

I arrived in the United States aboard the ZB Vance on July 17 1948. I was 2 years old so I have no memory of the crossing but I do have a couple of pictures that show me well dressed and smiling while playing on the deck. Is it possible to find the passenger list for that crossing?