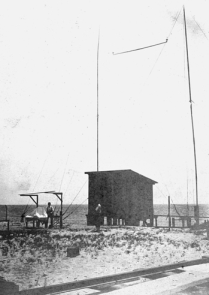 Wireless experiments that Reginald Aubrey Fessenden (1866-1932) conducted in North Carolina for the U.S. Weather Bureau from January 1901 to August 1902 led to important advances in radiotelegraphy and radiotelephony. After making voice transmissions between towers a mile apart on Cobb Island, Md., in 1900, Fessenden built a more advanced network stretching from Cape Hatteras, N.C., to Cape Henry, Va. In April 1902 he heard musical notes at his headquarters on Roanoke Island sent from Cape Hatteras, about 50 miles away, and before long he was "talking with Hatteras."

Disagreements with the Weather Bureau ended this project but not Fessenden's interest in radio. In 1906 he established the first transatlantic wireless circuit between Scotland and his new base in Massachusetts. On 24 and 31 December of that year he astonished telegraph operators along the eastern seaboard and at sea, many of whom used unlicensed copies of his equipment, with broadcasts of music and speech. The Radio Corporation of America eventually bought Fessenden's bankrupt National Electric Signaling Company and partly on that account became a communications giant. The combative inventor Fessenden patented more than 500 devices, including the fathometer (used to measure ocean depths), but earned little public recognition. State highway historical markers stand near the former sites of his towers on Hatteras and Roanoke Islands, but other attempts to memorialize him in North Carolina have failed.