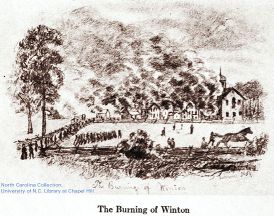 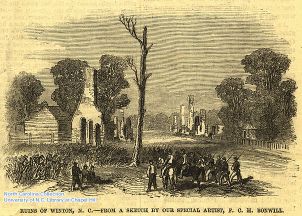 Winton, the seat of Hertford County, was burned by Federal troops on 20 Feb. 1862. It was the first North Carolina town burned by Union forces during the Civil War and the only one burned completely. On 19 February a flotilla of eight Union gunboats steamed up the Chowan River. As the vessels approached Winton's wharf, Confederate artillery and infantry opened up from the river bluff, but the boats sustained no serious damage.

When the flotilla returned the next morning, Winton was deserted, but several buildings had clearly been used for Confederate billeting and storage. These were torched, resulting in a blaze that left only one small house standing. The Hertford County Courthouse had been destroyed in 1830, and virtually all records from 1830 to 1862 were consumed in this fire, along with several dozen houses, stores, and other buildings. The cooperation of Union army and navy forces in the action constituted one of the first amphibious operations in the history of the American military.

"Burning of Winton." Courtesy of the North Carolina Collection at the University of North Carolina libraries. Available from http://www.lib.unc.edu/ncc/pcoll/civilwar/index.html?list=Destruction_and_Pillage (accessed May 18, 2012).