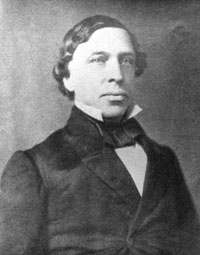 Warren Winslow (1810-1862) served as governor for less than one month, the shortest term of any of the state’s chief executives. The son of John and Caroline Martha Winslow, he was born in Fayetteville on January 1, 1810. His ancestors, unlike those of many of his political contemporaries, had supported the crown during the Revolution. His paternal grandfather, Edward Winslow, had been a chaplain in the British army. Nothing is known of his early life, but he may have attended the Fayetteville Academy where his father was one of the original trustees. He graduated from the University of North Carolina in 1827 and studied law while in Chapel Hill, returning to Fayetteville to set up practice. In January 1834 he married Mary Ivie Toomer, who preceded him in death by nineteen years. They had no children.

Winslow declared himself a Democrat and, caught up in that party’s resurgence, was elected to the State Senate in 1854. Intraparty maneuverings and compromises placed him in the position of speaker. He had barely assumed that role when Governor David S. Reid accepted election to a vacant seat in the United States Senate. Until 1868, the state constitution did not provide for a lieutenant governor; therefore, the speaker of the Senate was next in line for the office of chief executive. Reid turned over duties to Winslow who qualified as governor on December 6, 1854. Thomas Bragg, however, had been elected to the office in November and was to be inaugurated on January 1, 1855. Warren Winslow was governor of North Carolina for all of twenty-five days. Furthermore, he remains one of only two governors since 1776 who was not elected either by the General Assembly or popular vote.

Winslow was elected to represent District 3, which included Cumberland County, in the United States Congress in 1855. Though he took little active role in the proceedings, he quietly defended southern rights on the constitutional issues. He left the House of Representatives with the close of the 1861 session.

Winslow’s next service was as an advisor and agent of Governor John Ellis. On April 22, 1861, after the outbreak of hostilities but before North Carolina seceded from the Union, Winslow negotiated the surrender of the arsenal at Fayetteville to the state. He continued in charge of the facility during the spring of that year. In May the legislature created the Military and Naval Board to advise and aid an ailing Governor Ellis in the conduct of his office. Warren Winslow was named chairman of that board. Unfortunately, he delivered to Ellis the unwise and erroneous advice that the coast of North Carolina was adequately protected by the natural shoals and sand bars, and that the forts (Hatteras and Clark) would not need large garrisons. When the forts fell and the northeastern coast succumbed to Union blockade, many citizens blamed Winslow, damaging his influence and prestige.

He had been a delegate to the Convention of 1861 that voted for secession and which acted as the state’s legal body for the first year of the war. A few months after the debacle at Hatteras, he resigned his seat and retired to Fayetteville. Winslow died less than a year later on August 16, 1862 and was buried in Cross Creek Cemetery.