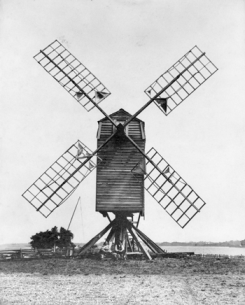 Windmills were so common along the North Carolina coast at the time of the Civil War that Charles F. Johnson, a Union soldier stationed on Hatteras Island, later wrote that there were "a greater number than I supposed were in existence in the whole country." Johnson may have exaggerated, but the sites of more than 100 eighteenth- and nineteenth-century windmills have been located in Carteret, Hyde, and Dare Counties alone. These were parts of gristmills, which were used almost exclusively for grinding corn. Many were located on isolated barrier islands populated primarily by fishermen and often separated from the nearest cornfield by expanses of broad, narrow sounds. Gristmills existed in this unlikely location because of a barter system in which Outer Banks fishermen traded surplus fish products-including shrimp, considered inedible but used for fertilizer-to mainland farmers for their surplus corn.

Windmills used along North Carolina's coast were almost all of the post mill design, so named because a massive center pole, up to two feet in diameter, supported the entire structure, including the elevated mill and mill house and the four large sails. This type of windmill was unique because it could be rotated to pick up wind from any direction. Early post mills in the Cape Fear region were used primarily to pump water to flood rice fields, although at one time they were used for flooding salt ponds with seawater in an effort to produce salt. In interior areas, more traditional tower mills were used extensively by North Carolinians to pump water.

North Carolina holds the modern record for the world's largest windmill, a 325-ton experimental structure erected atop Howard's Knob near Boone in the late 1970s. The twin-bladed rotor, mounted on a 140-foot tower, had a wingspan of 200 feet, greater than that of the largest passenger airplane. The project, designed to provide electrical power for 300 to 500 families in the Boone area, was fraught with problems. After four years the operation was discontinued, and the windmill described more accurately as "the world's largest wind-driven generator" was removed. Further development of wind power in the North Carolina mountains and along the coast was being pursued by various groups in the early 2000s.