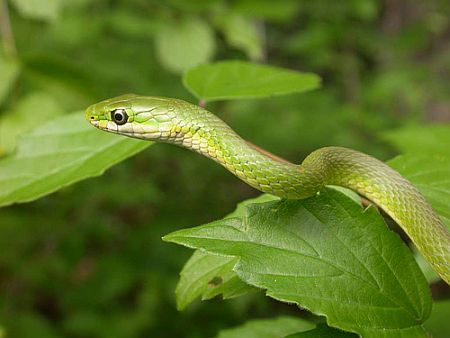 At least 71 species of reptiles are known to inhabit the state or its coastal waters. Representatives of four orders or suborders of reptiles, including alligators, lizards, snakes, and turtles, have been identified. The diversity of reptilian species is greatest in the Coastal Plain, which offers a wide range of habitats and a relatively mild climate. The rolling terrain and moderate climate of the Piedmont also support a diverse assemblage of reptiles. The geologically ancient Mountain terrain provides a more diverse range of habitats than the Piedmont, but the colder climate limits the number of reptilian species that inhabit this region.

Many species of reptiles and amphibians in North Carolina are threatened by human activity. Some of the larger reptiles, including all of the marine turtles and alligators, have been decimated by hunting; now considered endangered species, they are protected by American and international law. Populations of numerous species of smaller reptiles are declining due to habitat destruction by humans.

Twelve species of lizards have been identified in the state. A single colony of the spiny Texas horned lizard is known to exist in Onslow County. Other species include the northern fence lizard, the green anole, five species of skinks, and the six-lined racerunner.

Thirty-seven species of snakes are known to live within the state boundaries, with 31 local species of nonvenomous snakes representing the diverse worldwide Colubridae family inhabiting a wide variety of habitats. Well-known members of this family include the garter, black racer, corn, black rat, ringneck, hognose, milk, coachwhip, and king snakes. The semiaquatic cottonmouth inhabits marshes, swamps, rivers, and streams of the Coastal Plain and the eastern Piedmont. Five species of Viperidae, the poisonous family of snakes with the characteristic heat-sensitive pit between the eye and nostril on either side of a wide head, are found in North Carolina. Three species-the eastern diamondback, pygmy, and timber-are rattlesnakes. The poisonous copperhead can be found in or near forests in all parts of North Carolina. Copperheads inflict the most snake bites to humans in the state, but only one human fatality has been documented in the last century.

Twenty-one species of turtles have been reported in North Carolina or its adjacent coastal waters. The largest of these ancient reptiles are marine turtles. The leatherback sea turtle, the world's largest living turtle, has been observed along the coast but probably does not go ashore to lay eggs. Four other species of marine turtles-the loggerhead, green, Atlantic hawksbill, and Atlantic ridley-range along local coastal waters and estuaries, but only the loggerhead turtle commonly builds nests on beaches, primarily south of Cape Lookout. Numerous other species of aquatic and terrestrial turtles live in North Carolina. The largest of these is the common snapping turtle, which should be treated with caution because of its powerful jaws.