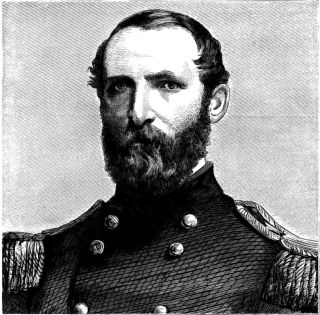 The Civil War battle of Whitehall occurred on 15-16 Dec. 1862 at present Seven Springs in Wayne County when the Confederacy's Brig. Gen. B. H. Robertson and the Union's Maj. Gen. John G. Foster clashed during Foster's attempt to capture the railroad junction at Goldsboro. Late on 15 Dec. 1862 Union cavalry scouts reached Whitehall shortly after Confederate troops crossed north over the bridge spanning the Neuse River, set it on fire, and took up defensive positions. Foster's cavalry rolled hundreds of barrels of pitch to the riverbank and set them on fire to light the Confederate positions. Union artillery attempted to destroy the frame of the Confederate ironclad Neuse that was under construction while the cavalrymen exchanged fire with Robertson's pickets. After several hours of futile conflict, the infuriated cavalrymen burned the village and returned to camp.

The next day Foster arrived at Whitehall and engaged the enemy, attempting to make the Confederates believe that his men intended to cross the river. Foster thought that he could then slip the rest of his army past Whitehall to attack a railroad trestle four miles south of Goldsboro. But the Confederates were not fooled and the battle lasted until sunset. By nightfall on 16 December, most of Foster's army had marched west, leaving a small force at Whitehall to remove the wounded and bury the dead.

On 18 December Foster withdrew back through Whitehall and retired to New Bern. After his withdrawal, a Confederate patrol made an alarming discovery. One hundred Union troops had been left unburied on the field, and a 100-yard-long pit was filled with dead soldiers. Despite promotions for Foster and his men, many northern newspapers rated the expedition a disaster because of the extensive Union losses and the fact that Foster failed to capture the crucial railroad junction at Goldsboro.

Why is it that the despicable

Why is it that the despicable atrocities committed by the "infuriated" Federal troops upon the town of White Hall -- and its innocent citizens -- are almost never brought to anyone's attention? When Lee's army went to Gettysburg, he was very careful that civilians and their property were not damaged. The Yankees didn't even care for their own soldiers ! ! Yet many so-called "histories" claim this as a "victory" for the Union side -- really NOT "union" because they certainly caused DISunion.

I would like to make a request for information to be corrected. The correct spelling of the town's name was White Hall. Two words, not one.

Thank you for visiting NCpedia and taking the time to share this error.

This article is licensed from the University of North Carolina Press and our librarians will have to contact the Press to work with them on amending the entry.

We truly value your comment and it helps us to improve NCpedia.

Please feel free to contact Research and Reference Services at the Government and Heritage Library for additional help.Their direct email address is slnc.reference@ncdcr.gov. Additional contact information may be found for them at http://statelibrary.ncdcr.gov/reference/reference.html. Thank you!