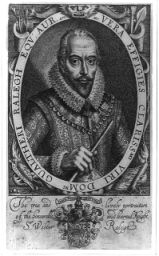 Virginia was the name applied to that part of the New World granted to Sir Walter Raleigh by England's Queen Elizabeth I, the "virgin queen." It appears for the first time on the seal issued to Raleigh as "Lord and Governor of Virginia" at some unspecified date prior to 25 Mar. 1585. He was entitled to discover, hold, and occupy "such remote heathen and barbarous landes . . . not actually possessed of any Christian Prynce and inhabited by Christian people." Raleigh based exploratory expeditions in and attempted to colonize the area of coastal North America that is now North Carolina. His men also ranged northward into the Chesapeake Bay. Even though Raleigh's attempts were unsuccessful, the name "Virginia" became attached to newer colonization efforts that resulted in the establishment of Jamestown in 1607. The site of the 1584-90 activity came to be called "Ould Virginia."