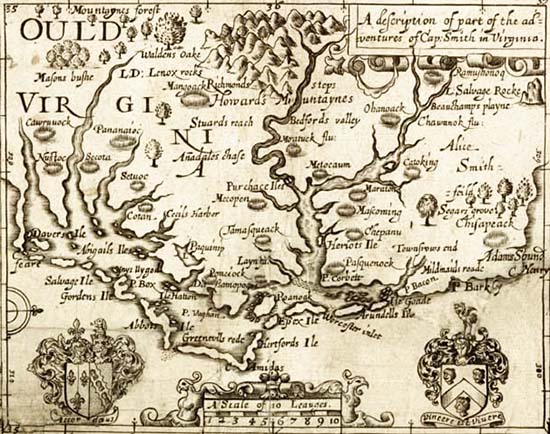 "Ould Virginia" as a term enjoyed brief currency in the seventeenth century as a name for territory south of the Chesapeake Bay covered by Sir Walter Raleigh's 1584 patent of discovery. John Smith may have coined the name, and Robert Vaughan's map of "Ould Virginia" in Smith's General History of Virginia (1624) accelerated its spread. William Strachey had used South Virginia in the same sense around 1612. While the two names were interchangeable, confusion sometimes occurred because "South Virginia" also referred to the land holdings of the Virginia Company of London (34°-41° N). By midcentury the use of both names was in decline. North Virginia, the holdings of the Virginia Company of Plymouth (38°-45° N), had come to be known as New England (perhaps another of Smith's coinages), so there was no further need for a South Virginia to balance it. Meanwhile, the most populous part of South Virginia had been partitioned into Virginia and Maryland, and the Royal grants of 1629 and 1663 officially named the sparsely settled area below the 36th parallel "Carolana" and "Carolina," respectively. Virginia's nickname of "Old Dominion" refers to the predominant royalism of Virginia in the Commonwealth Period and has nothing to with Ould Virginia.

Smith, John. The Generall Historie of Virginia, New-England, and the Summer Isles: With the Names of the Adventurers, Planters, and Governours from Their First Beginning, Ano: 1584. To This Present 1624. With the Procedings of Those Severall Colonies and the Accidents That Befell Them in All Their Journyes and Discoveries. Also the Maps and Descriptions of All Those Countryes, Their Commodities, People, Government, Customes, and Religion Yet Knowne. Divided into Sixe Bookes. London: J.D. and J.H. for Michael Sparks. 1624. Documenting the American South, The University of North Carolina at Chapel Hill. https://docsouth.unc.edu/southlit/smith/smith.html