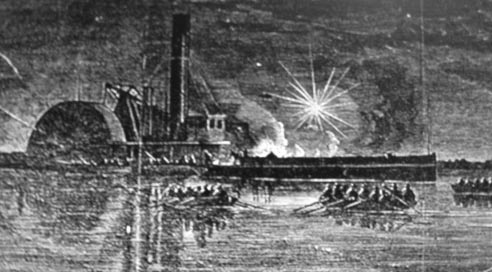 The USS Underwriter, a navy gunboat, fought in the sounds and rivers of North Carolina during the Civil War. Early in 1864 the Underwriter was in the Neuse River at New Bern when Confederate forces under Maj. Gen. George E. Pickett mounted an attack to recapture the city. As part of the assault, about 250 Confederate sailors and marines in 14 boats and launches led by Cdr. John Taylor Wood secretly descended the Neuse River from Kinston and found the Underwriter anchored north of New Bern, close to the west bank of the river.

In one of the most daring encounters of the war, Wood's command boarded the Underwriter shortly after 2:30 a.m. on 2 Feb. 1864, and after vicious hand-to-hand fighting on deck, captured the ship and part of its crew. Five Confederates were killed along with nine Union sailors, including Acting Master Jacob Westervelt, the Underwriter's commander. Many others were wounded. Unfortunately for the Confederates, however, the Underwriter's fires were banked and it lacked sufficient steam to get under way. Once it was clear that the vessel had been captured, Union shore batteries opened fire on the ship. Wood had no choice but to burn it and retire back up the river, carrying with him the wounded of both sides and the Union prisoners. The Underwriter finally blew up and sank as the fire reached its magazine just before sunrise.

T. J. Scharf, The History of the Confederate States Navy from Its Organization to the Surrender of Its Last Vessel (1887).