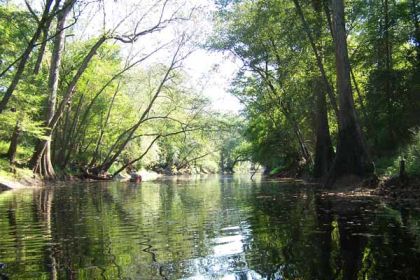 The Civil War action known as the Battle of Trenton, generally considered a skirmish, occurred on 6 Dec. 1863 in Jones County on the banks of Chinquapin Creek, about six miles west of Trenton. The Union's Capt. C. H. Roche left New Bern to retrieve the families of three Confederate deserters who subsequently joined the 2nd North Carolina Infantry, a regiment fighting for the Union. Roche sent a force of 23 men to Trenton to get two of the families. The men crossed the Trent River and rescued the two families without encountering Confederate troops.

Roche took his remaining 50 men farther up the Trent road to remove the third family. On their way to the area known as Chinquapin Chapel, where the family lived, the Union troops confronted a dozen cavalry from the 66th North Carolina State Troops. The Confederates removed the planks from the bridge spanning Beaver Dam Creek, hoping to prevent Roche's advance. The numerically superior Union force drove the enemy back, repaired the bridge, and continued its march. But at Chinquapin Creek, Roche found that the North Carolina troops had destroyed the bridge there and were waiting for him on the opposite side. He dispersed the Confederates with his howitzer but did not cross the creek for fear he would encounter a substantial Confederate force. Roche and his men abandoned their efforts to retrieve the third family, rejoined the other troops, and returned to New Bern that same evening. Roche reported one man killed and one wounded. According to the Confederacy's Brig. Gen. Seth M. Barton, three North Carolinians were wounded in the battle.

Was this a Union Victory?

Was this a Union Victory? Sounds like it was, but Roche withdrew. Please state as such. Thanks.