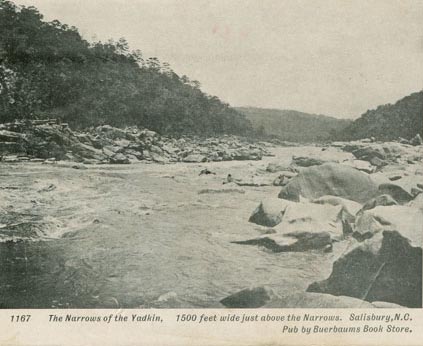 Trading Ford was a shallow area of the Yadkin River located about seven miles northeast of Salisbury. As one of the few places where the Yadkin could be crossed on foot or horseback, Trading Ford was a focal point for the movement of people through Piedmont North Carolina for hundreds of years. Early European explorers followed old, well-established Indian trading routes that crossed the Yadkin at Trading Ford and connected the Indians of eastern North Carolina and Virginia with those of western North Carolina and beyond. As he followed this path in 1701, English explorer John Lawson paused at Trading Ford to stay with a tribe of Saponi Indians encamped there. Today, parts of highways I-85 and U.S. 64 follow the general direction of these trading paths.

In the mid-eighteenth century, Trading Ford saw the migration of German and Scotch-Irish settlers traveling down the Great Wagon Road from Pennsylvania, New Jersey, and Maryland in search of unclaimed lands. One fork of this road merged with the Indian trading path north of the Yadkin River before crossing Trading Ford. Like a highway interchange, the area attracted early settlements along the banks of the Yadkin and its tributaries in present-day Rowan and Davidson Counties. Among the early inhabitants of the "Jersey Settlement" on the Davidson County side of Trading Ford was the Ellis family, whose plantation would become the birthplace of antebellum governor John W. Ellis.

In February 1781 Trading Ford played a minor role in the Revolutionary War in North Carolina. After the Battle of Cowpens, Patriots under Gen. Nathanael Greene marched north from Charlotte to avoid the British army led by Lord Charles Cornwallis. The Americans arrived at Trading Ford in the evening and safely crossed to the other side, taking all boats with them. The British troops arrived shortly afterward, but rains had caused the Yadkin to rise, and without boats they had no means of catching the Americans.

Although a bridge had been built across the Yadkin by the mid-nineteenth century, Trading Ford remained in use and was sketched in 1849 by Benson Lossing for his Pictorial Field-Book of the Revolution. As a result of a dam built at High Rock in the 1920s, much of the lowlands near Trading Ford were flooded, and the ford no longer is passable. However, the islands located near it are still visible to the east of the I-85 bridge.

"Yadkin River and the Trading Ford - Narrows of the Yadkin." Image courtesy of official  Rowan County website. Available from http://www.rowancountync.gov/GOVERNMENT/Departments/RowanPublicLibrary/HistoryRoom/TheoBuerbaumsSalisbury/YadkinRiverandtheTradingFord/NarrowsoftheYadkin.aspx (accessed May 25, 2012).

After Cowpens, Daniel Morgan's force marched north from Charlotte, not Greene's. Greene and his part of the army were at Cheraws, SC at the time oif the battle.

Greene left his part of the

Greene left his part of the army in camp on Hicks Creek near Cheraw, but he himself met Morgan near Sherrill’s Ford on the Catawba River following Cowan’s Ford. Morgan and Greene marched to Salisbury from there separately.

Thank you for the correction.

Thank you for the correction. Since it comes from a published source, we likely cannot change it, but I'll pass it along and possibly we can.

How so I find out about the

How so I find out about the Trexlers from Germany who supposedly settled along Trading Ford?

Thank you for visiting NCpedia and for sharing your question. I have forwarded this to reference services at the NC Government & Heritage Library. A reference librarian will contact you shortly by email to help.