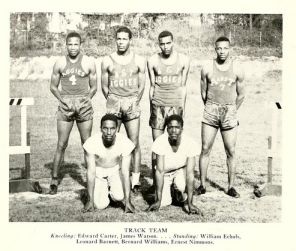 Track and field in North Carolina is associated largely with colleges and high schools, most of which have track-and-field and cross-country teams for both genders. Track-and-field activities in North Carolina colleges date back to the 1880s. High school state championships in the sport were first held in 1913. Track and field has rarely been a revenue-producing sport, and cutbacks in scholarships have hindered it at the college level.

A number of nonnatives have gained acclaim during and after their college careers at North Carolina universities. North Carolina Central University runner Lee Calhoun captured gold medals in the 110-meter high hurdles in the 1956 and 1960 Olympics, while Vince Matthews of Johnson C. Smith University won a gold medal in the 1968 Olympics in the 4 × 400 meter relay and a gold medal in the 1972 Olympics 400-meter run. Duke University's Dave Sime was a record-setting sprinter in the mid-1950s and won a silver medal in the 1960 Olympics. Joan Benoit, who attended N.C. State in the early 1980s, won the first Olympic marathon for women in 1984. North Carolina Central was the home of a number of prominent African runners in the 1970s, including Kenyans Robert Ouko and Julius Sand, who ran on the Kenyan gold medal 4 × 400 meter relay team in the 1972 Olympics. California native Marion Jones, a track and basketball standout at UNC-Chapel Hill, became the first woman to win five medals at one Olympics. In Sydney in 2000, Jones won gold medals in the 100-meter dash, the 200-meter dash, and the 1,600-meter relay and bronze medals in the long jump and 400-meter relay.

The best-known track-and-field coach from the state was Dr. LeRoy Walker, head coach of the North Carolina Central team from 1945 through 1974. He coached the Ethiopian and Israeli track teams in the 1960 Olympics and was head coach of the 1976 U.S. Olympic track-and-field team. In 1992 Walker was named president of the U.S. Olympic Committee. Duke University's Al Buehler was coach or manager of three U.S. Olympic teams, while George Williams of Saint Augustine's College was assistant coach of the 1996 U.S. track team. Williams presided over the state's most successful track program. Saint Augustine's captured seven National Collegiate Athletic Association (NCAA) Division II national outdoor men's team titles from 1989 through 1995.

Durham, bolstered by the long presence of Walker and Buehler, has been the track-and-field capital of the state. Duke University has hosted a number of international track meets involving the world's top athletes. These meets include the 1971 and 1994 United States-Pan Africa meets, the 1974 United States-Soviet Union meet, the 1975 United States-Pan Africa-West Germany meet, and the 1980 NCAA championships. Several world-class athletes also train at local campus facilities in the Research Triangle area.

The recreational running boom that began in the 1970s has added to the state's running population but had little impact on the sport's popularity as a spectator sport. Road races, such as the Charlotte Observer Marathon, which began in 1977, are held across the state.

Jim Sumner, A History of Sports in North Carolina (1990).