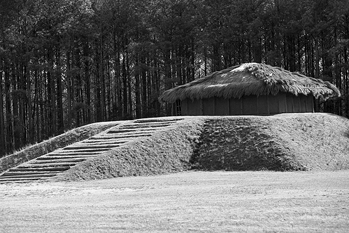 Town Creek Indian Mound is located five miles southeast of Mount Gilead in Montgomery County. More than 600 years ago, migrating Indians selected this spot overlooking the Little River for a ceremonial center. The Town Creek center served as a fortified refuge and a place to discuss matters important to the people of the Pee Dee culture, as well as a site for religious ceremonies and feasts, which often lasted several days. When white settlers arrived in the eighteenth century, the Pee Dee Indians had long been living elsewhere, probably with the Catawba. When whites occupied the site where the Pee Dee had lived, they left the mound alone but farmed the land around it.

Beginning in the late nineteenth century, people untrained in archaeological techniques from time to time excavated the site in hopes of finding a treasure or other valuable objects. In 1936, however, under Joffre L. Coe, a student at the University of North Carolina in Chapel Hill, careful archaeological excavations began. Coe's thorough work, continuing into the late twentieth century, produced a unique record of professional excavations.

In 1937 the landowner, L. D. Frutchey, donated the site to the state for scientific excavation and the creation of a state park, and Town Creek Indian Mound became the first North Carolina State Historic Site. Transferred to the Department of Archives and History in 1955, the modern-day site includes a visitors center, two temples, a burial house, and a stockade, in addition to the mound. Restorations are based on extensive archaeological and documentary research.

It would be really neat if I

It would be really neat if I could find photos of the original excavation site looked like and how much of the site is actually original.

We visited the Indian mounds

We visited the Indian mounds in Macon many years ago. Is there any relationship between the PeeDee Indians of the Town Creek Indian mounds and the Muscogee Indian mounds at the Ocmulgee National Monument in Macon Georgia? Are they both representative of the Creek Nation?

You know you people are real

There is not enough know to really answer that, but as the article says, they likely lived with the Catawba tribe by the time the area was settled by Europeans. The Catawba were a Siouan tribe. Sioiuan refers to their language. Many tribes are Siouan, Algonquiian, or Iroqiuian, I'm not sure about the Creek, but there does not seem to be any evidence that the Creek and Catawba or PeeDee were related. I think that would take a lot of research to find out.

I like it but it need a lot more humor.

What is the actual height and

What is the actual height and width of the structure

what are the history and

what are the history and building process

Thank you for your question about this NC treasure. Surprisingly, I have not been able to find information about the dimensions of the mound. If you would like to contact them directly, perhaps they would be able to provide this information. Physical and email address is below:

THIS IS VERY UGLY

THIS IS VERY UGLY