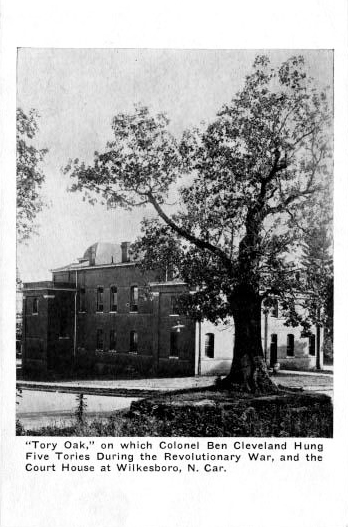 The Tory Oak, sometimes referred to as the Cleveland Oak, grew for possibly three centuries in what is now the town of Wilkesboro. The exact age of this famous tree will never be known, and all that remains is an 11-foot-tall, mortar-filled, deteriorating dark stump. The tree is famous for the role it played in the American Revolution, when Col. Ben Cleveland, a leading Patriot in western North Carolina, used its spreading limbs to hang at least five Tories during the fall of 1779. Two of the five had plundered the Lincoln County home of George Wilfong, been apprehended by Cleveland's scouts, and brought to the Wilkes County courthouse. There, Cleveland summarily administered his justice, using Wilfong's clothesline (which the thieves had used to steal his horses) to hang the two Loyalists.

The enraged British forces sent a captain and two soldiers to capture Cleveland. They nearly accomplished this aim, but instead found themselves taken prisoner; shortly thereafter, they too were dangling from the huge branches of the Tory Oak.

For many years afterward, the Tory Oak stood nobly as a familiar landmark of the struggle for independence. In 1980 the tree had the distinction of being North Carolina's "champion" black oak, with a circumference of 14 feet, a crown height of 50 feet, and an overall limb spread of 40 feet. It withstood the strain of three operations to remove rotten portions, which were replaced with concrete mortar. The rotting continued, however, and two-thirds of the tree was felled by heavy winds in June 1989. In 1992 the National Park Service designated the Tory Oak site as a Certified Protected Site of the Overmountain Victory National Historic Trail.