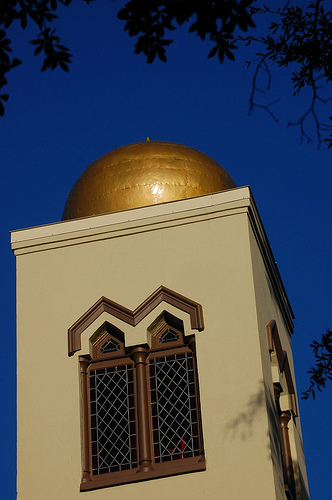 The Temple of Israel, begun in 1875, is the oldest Jewish house of worship in North Carolina. Jews, mainly of German descent, had been a prominent part of the Wilmington population since the eighteenth century but had not had a permanent place to worship. The Jewish population of Wilmington increased during the Civil War. In 1867 an Orthodox congregation, the Wilmington Hebrew Congregation, was organized by Rabbi E. M. Myers of Charleston. This group was short-lived, but a Reform congregation was organized in 1872 and three years later began building the Temple of Israel.

Recently discovered information ascribes the design of the temple to Philadelphia architect Samuel Sloan. Previously it had been attributed to Alex Strausz, a local builder and congregation member. If Sloan was the designer, the Temple of Israel is the third Wilmington house of worship he designed. The others are the current First Baptist Church and the previous First Presbyterian Church, both begun in 1859. The temple's Moorish-style building, which was restored in 1982 and 2000, features twin towers with onion domes painted gold. The main body of the building is covered by a gable roof and spans the two towers.

Hi, I am the historian of the

Thank you for visiting NCpedia and offering to contribute.

That is a fantastic offer and I have emailed you with additional information about contributing to NCpedia.

Best wishes and I look forward to hearing from you,