State Toast: The Old North State: A Toast (aka, The Tar Heel Toast) 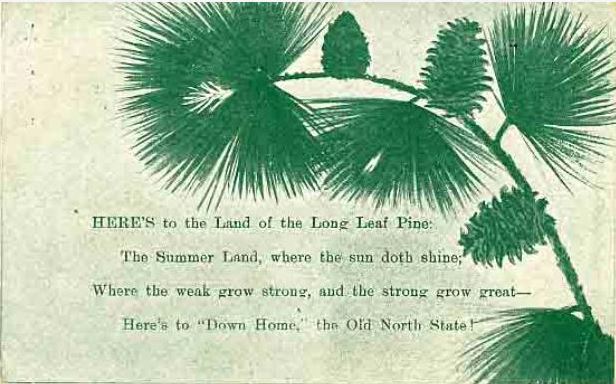 "The Old North State", a poem written by Leonora Monteiro Martin and set to music by Mary Burke Kerr (later Robertson), was recognized by the General Assembly on May 21, 1957 as the official State Toast of North Carolina (Session Laws, 1957, c. 777) .

The origin of the poem is believed to be associated with a dinner held by the North Carolina Society of Richmond (Virginia) in 1904. On May 20th that year, the North Carolina Society of Richmond held a banquet in the city’s Masonic Temple as its first annual meeting for transplanted natives and devotees from the Old North State. The date was also the 129th anniversary of a supposed patriotic document known as the Mecklenburg Declaration of Independence, and the Richmond event honored the memory of forbears with numerous speeches and toasts. Of note today is that the existence and authenticity of the Mecklenburg Declaration has never been proven, and historians now widely agree that it is a sort of "urban legend."  The Mecklenburg Resolves of May 31, 1775 are an historical fact, however, and were the radical prerevolutionary resolves made by a committee in Mecklenburg County. Like the Declaration of Independence that would come a year later, they denied the authority of Parliament over the colonies. In any event, one of the evening’s patriotic toasts has been associated with the “The Old North State”. It is a poem written by Leonora Monteiro Martin and reportedly commissioned for the event.

Numerous accounts have attributed the first public reading of Martin's poem to the Richmond banquet. Martin reportedly wrote the verse at the request of Dr. J. Allison Hodges. At the dinner it was read by the Rev. Walter W. Moore at the close of the evening.  Some years later, on September 29, 1917, the Oxford Public Ledger revisited the 1904 event in an article written about another of Martin's poems -- "Our Flag Song" set to the tune of Lohengrin -- that she had recently written. The article recounted the recitation of the earlier poem by the Rev. Moore at the end of the May 1904 evening:

"The next morning the toast was published in the Richmond papers, was promptly reprinted in all the state papers, the patriotic enthusiasm it aroused, sweeping full-tide throughout the state. Written straight from the heart, the lines of the toast strike a responsive chord in the heart of every native or adopted Tar Heel.  It is still quoted at every public function and on occasions when the glories of the Old North State are being extolled. . ."

The Richmond Times Dispatch did report on the banquet the following day, May 21, 1904. It recounted the many tributes and testimonials given and some of the dignitaries in attendance, but it did not give the name of the toast's author. The article also mentioned a program printed for the evening, and it may be that Leonora Martin's poem was published and attributed there. Unfortunately, a surviving copy of the program has not been located. 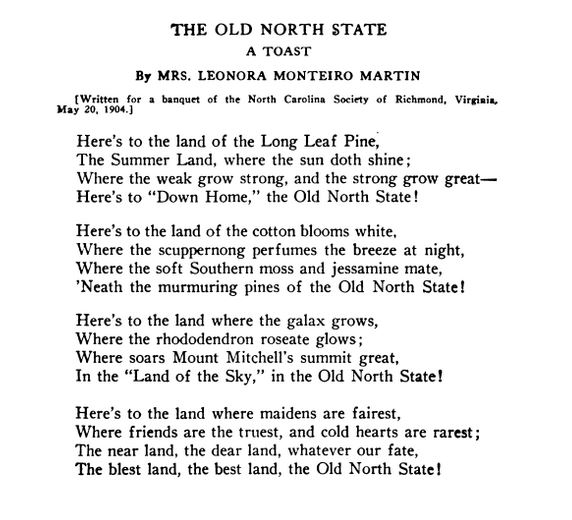 From May 1904 on, lines of the poem began to appear in newspapers associated with tributes and toasts given at other occasions. There were also a few reported attributions to other writers. In October 1907, The Roanoke News in Weldon led a brief piece reporting on the use of the poem for the Jamestown Exposition with notice that "Various claims to the authorship of the now famous toast" had been circulating and that the paper had itself earlier attributed authorship to New Yorker James Lindsay Gordon. The write-up also referred to another writer, a "Mrs. Mary C. Martin, of Knoxville, Tenn." In fact, by 1907, Leonora Martin and her husband, Harry C. Martin, were living in Knoxville, Tennessee. And around that time Leonora was mentioned in The Commonwealth (Scotland Neck) as "Now Famous" for her poem's debut at the 1904 dinner. A few years later in 1909, the poem adorned the flyleaf of a souvenir booklet produced in Wilmington by Iredell Meares for a visit to the city by President William Howard Taft during the first year of his presidency.

The poem became almost instantly ubiquitous in association with patriotic and nostalgic feelings for the state, and within a few years it appeared on postcards and in anthologies. It appeared under Leonora Martin's authorship with mention of the Richmond dinner in the 1909 anthology Library of Southern Literature (Volume 14). And in 1914 Leonora Martin herself appeared in the Women's Who's Who of America.

In the early 1930s, Mary Burke Kerr, a music teacher in Sampson County, composed music for Leonora Martin’s poem. Kerr reportedly had learned the toast as a child and composed the music while she was driving her car.  She obtained initial copyright for the composition on April 5, 1933, and the same year the General Assembly officially recognized her composition. The General Assembly also requested that WPTF, a Raleigh radio station, play a recording to acquaint North Carolinians with it.  From that point on, generations of North Carolina school children learned the song.

In 1957 the General Assembly officially recognized the combined creations of Martin and Burke as the State Toast.

[Here's to the Land of the Long Leaf Pine]. Postcard. 1908. Item H.1953.38.150, from the collection of the North Carolina Museum of History. http://collections.ncdcr.gov/RediscoveryProficioPublicSearch/ShowItem.as... (accessed April 12, 2016).

Thank you so much for visiting NCpedia and for bringing this error to our attention! We will look into making this correction.

Is there anywhere I can order

Is there anywhere I can order a plaque or a framable print of the NC toast?
Thanks

Thank you for visiting NCpedi and for taking the time to share your question.

Unfortunately, we do not have any information about that.  You may want to try a web search to see what you find.