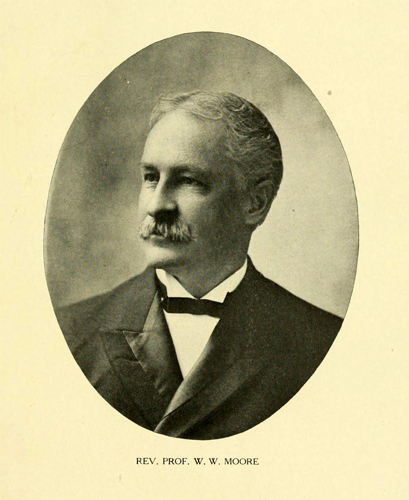 Walter William Moore, Presbyterian clergyman and educator, a native of Charlotte, was of Scotch-Irish ancestry. His father, Isaac Hudson Moore, died when he was less than six years old; his mother, Martha Parks Moore, lived until 1925. After attending school in Charlotte, Walter enrolled in the Finley High School at Lenoir. He received an A.B. degree from Davidson College in 1878 and was graduated from Union Theological Seminary, then at Hampden-Sydney, Va., three years later.

On 30 August 1881 Mecklenburg Presbytery ordained him and designated him as stated supply of the Swannanoa and Oak Forest Presbyterian churches. From this field he went to the pastorate of the Presbyterian church at Millersburg, Ky., where he preached for a time in 1882–83. In the latter year he returned to Union Seminary as a teacher of Hebrew. He was assistant instructor (1883–84), adjunct professor (1884–86), and associate professor (1886–89) before becoming a full professor in 1889. Moore became the first president of the seminary in 1904 and assumed the duties of lecturer in Hebrew in 1915. In the spring of 1926 he resigned the presidency on account of ill health.

Moore played a large role in moving Union Seminary from Hampden-Sydney to Richmond, Va., in 1898. He was influential in expanding the institution's physical plant and in enriching its curriculum. Following overtures from him, James Sprunt of Wilmington arranged for the establishment of the Sprunt Lectureship in 1911. Under the guidance of President Moore, the seminary inaugurated a graduate department in 1915.

Active in the affairs of the Presbyterian Church of the United States, Moore was widely recognized as its leader during the first quarter of the twentieth century and served as moderator of the General Assembly in 1908. He was a special lecturer at McCormick Theological Seminary in 1895, delivered the Stone Lectures at Princeton Seminary in 1897, and was Reinicke lecturer at the Episcopal Theological Seminary of Virginia in 1898. In 1919 he was Sprunt lecturer at Union Seminary in Virginia, and in 1921 he delivered the Otts Lectures at Davidson College. Moore was a prime mover in the founding of the General Assembly's Training School for Lay Workers, which opened in Richmond in 1914.

In 1886 he married Loula S. Fries of Winston-Salem, and they had four children: Lisette Fries (Mrs. Andrew R. Bird), Walter Vogler, Francis Hudson, and Mary Louise. Moore died in Richmond and was buried in Salem Cemetery, Winston-Salem. His portrait is at Union Theological Seminary in Richmond.