The General Assembly of 1945 declared Red and Blue of shades appearing in the North Carolina State Flag and the American Flag as the official State Colors. (Session Laws, 1945, c. 878). 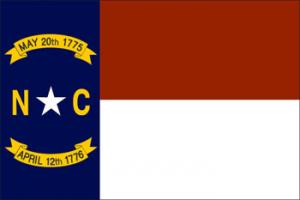 Until the early 1940's the colors of the University of North Carolina (blue and white) were generally accepted as the unofficial state colors.

Billy Arthur of Onslow introduced the State Colors bill in 1945, choosing red and blue to match colors of both the North Carolina and the United States flags. He noted that when combined with the white paper of official state documents, they present the three colors of both flags.

AN ACT TO ADOPT OFFICIAL STATE COLORS FOR THE STATE OF NORTH CAROLINA.

WHEREAS, North Carolina is one of only a few states that has not adopted official state colors; and

WHEREAS, there is widespread sentiment among the school children of the State and its citizens generally looking to the adoption of suitable and appropriate colors as official colors for the State: Now, therefore,

Section 1. That red and blue, of shades as adopted and ap­pearing in the North Carolina State flag and the American flag, shall be, and hereby are, declared to be the official State colors for the State of North Carolina.

Sec. 2. That the use of such official State colors on ribbons attached to State documents with the Great Seal and/or seals of State Departments is permissive and discretionary but not directoratory.

Sec. 3. That all laws and clauses of laws in conflict with this Act are hereby repealed.

Sec. 4. That this Act shall be in full force and effect from and after its ratification.