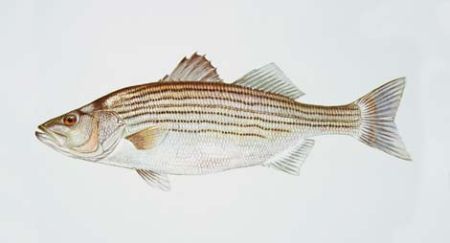 Male stripers typically are sexually mature at 2 years, while sexually mature females are 3 or 4 years old. Spawning occurs in the spring, when water temperatures are between 62º and 70º F. A 20-pound female may release as many as 2 million eggs. Usually, less than 1 percent of these eggs survive to become adults.

Striped bass eggs hatch into yolk-sac larvae after 2 to 3 days. Within two months, these young stripers are 1 to 2 in. long and begin to feed on small fish. In the Albemarle Sound population, most of these stripers remain in the sound until they become sexually mature. Once they are mature, they join the yearly spawning migration up the Roanoke River to Weldon, N.C. 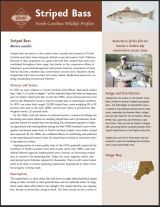 Striped bass are native to the Atlantic Coast. Most of North Carolina’s striped bass population— the third largest on the Atlantic Coast— is found in the Albemarle Sound and its tributaries, especially the Roanoke River. Striped bass are also found in the Tar-Pamlico, Neuse, White Oak, Cape Fear and Northeast Cape Fear rivers. They can also be found in Oregon Inlet and along North Carolina’s beaches from Topsail Island north to the Virginia state line.

Striped bass can live in fresh water and are stocked in reservoirs including Lake Norman, Lake Gaston and Jordan Lake.

Striped bass are native to the coastal rivers, sounds and estuaries of North Carolina and other states along the Atlantic coast and eastern Gulf of Mexico. Because of their popularity as a game and food fish, striped bass were once overfished throughout their range, but thanks to the cooperative efforts of fishermen, governmental agencies and private industry, restoration of these fish has become a modern-day conservation success story. Hatchery-reared striped bass have been stocked into many inland, landlocked reservoirs creating outstanding recreational fisheries.

In 1585, an early explorer to North Carolina, John White, illustrated striped bass “some 5 or 6 foote in lengthe,” and he indicated these fish were an important part of a Native American’s diet. In the late 1800s, seines and pound nets were used in the Albemarle Sound to harvest striped bass in tremendous numbers. In 1876, one seine haul caught 35,000 striped bass, some weighing 80 to 90 pounds each, and in the early 1890s, several were taken in pound nets that weighed nearly 125 pounds each. 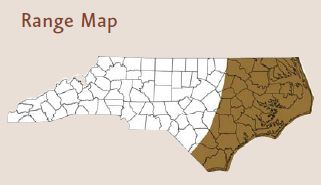 By the 1940s, with the advent of outboard motors, commercial fishing was becoming even more efficient at catching striped bass and a recreational, hook-and- line fishery for striped bass was dawning. The tremendous growth of industry, agriculture and municipalities during the mid-1900s resulted in poor water quality and altered water flows in North Carolina’s coastal rivers where striped bass spawned. By the 1960s, the combined effects of overfishing and pollution in the spawning and nursery areas for striped bass resulted in successive years of reproductive failure.

Implementation of water quality laws of the 1970s gradually improved the condition of North Carolina rivers and sounds, and in the 1980s, state and federal fisheries agencies implemented strict controls on harvesting striped bass to conserve the remaining fish. Today, the stock supports robust commercial and sport fisheries enjoyed by thousands. There is still conservation work to be done to restore spawning striped bass populations in other rivers, but progress is being made.

The striped bass is a silver-white fish with seven to eight horizontal black stripes along its sides. Its back is often greenish-blue and its underside white. Its large silver scales shine when held in the sunlight. The striped bass has two separate fins, known as dorsal fins, along its back. The front dorsal fin has a series of nine spines, whereas the second dorsal fin has one spine with a series of soft fin rays. There are two spines on the gill cover and two narrow tooth patches on the tongue. Most adult striped bass are 1 to 3 feet long and weigh 2 to 20 pounds. As the striped bass population continues to recover, however, larger fish reaching 30 and 40 pounds are becoming more common.

Striped bass are anadromous fish, meaning they spend most of their lives living in saltwater but migrate into freshwater rivers to spawn. The striped bass prefers to spawn among the rocky rapids near the “fall line” where rivers make the transition from the hilly piedmont to the relatively flat coastal plain.

Most striped bass spawning begins when the water temperature reaches 62ºF. As many as 20 male stripers surround a single female, releasing milt to fertilize the eggs released by the female. Spawning events occur near the surface and are often called rockfights; a large group of striped bass, which are also known as rock or rockfish, splashing around can create a dramatic commotion. After spawning, the semi-buoyant fertilized eggs must drift in the water for two or three days before they hatch. During this time, there must be enough flow in the river to keep the eggs afloat or they will sink to the river bottom and be covered by sediment.

After hatching, young striped bass (called yolk-sac larvae) are carried by currents to nursery areas in the lower Roanoke River and western Albemarle Sound. For the first seven to 14 days, they live by getting energy from their yolk-sac (formerly the yolk portion of their egg). After their yolk-sac is used up, striped bass larvae feed on tiny water animals known as zooplankton. By the time they are two months old, striped bass are one to two inches long and begin feeding on small fish. Stripers spawned in the Roanoke River generally spend two to four years of their lives maturing in the Albemarle Sound before returning to spawn in the Roanoke River. Because they can live over 20 years, adult stripers may migrate many times from the Atlantic Ocean through the Albemarle Sound and to the Roanoke River to spawn during their life span.

The striped bass is one of the most important food and game fish found in the coastal waters of the United States. Striped bass populations were severely depleted because of overfishing, water pollution and changes in river flows, but recreational and commercial fishermen are again able to enjoy catching and harvesting striped bass now that populations are restored. 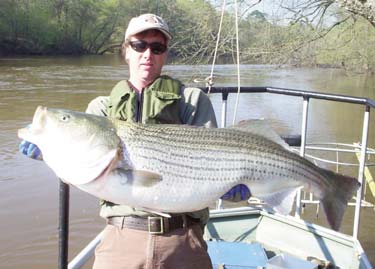 In a modern day conservation success story, the Albemarle Sound/Roanoke River striped bass population was declared restored in 1997 and now supports a world-class fishery each spring. The N.C. Wildlife Resources Commission (NCWRC) conducts a recreational angler creel survey on the Roanoke River during each spring fishing season to estimate annual striped bass harvest and ensure the population remains at a sustainable level. In addition to the creel survey, NCWRC fisheries biologists conduct electrofishing surveys to gather data on the spawning stock and look for trends from year to year.

During the electrofishing surveys, NCWRC and N.C. Division of Marine Fisheries biologists collect, tag and release thousands of striped bass each spring. Although most tag returns come from the Roanoke River and Albemarle Sound, several tags have been returned from fish caught in waters ranging from Maryland to Maine. By participating in the creel survey and returning striped bass tags, fishermen can help biologists successfully manage striped bass in North Carolina, which will, in turn, maintain the success story for years to come.

To see striped bass in action, go to: http://www.reel-time.com/videos/striped-bass-videos/ 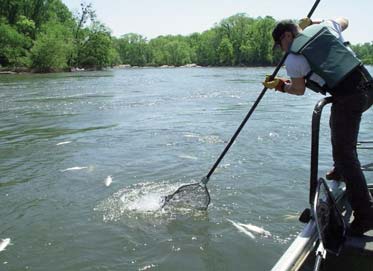