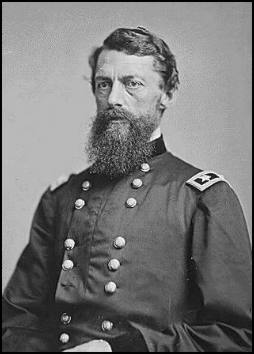 Stoneman's Raid, conducted by the Union's Maj. Gen. George Stoneman in late March and April 1865, constituted one of the last military operations in the Civil War. Stoneman's cavalry, about 6,000 strong, entered North Carolina from Tennessee in late March, intending to cut off Gen. Robert E. Lee's escape routes in the event of his expected defeat in Virginia. Moving rapidly through Boone and Wilkesboro, Stoneman veered northward into Virginia, severing rail lines around Lynchburg and Christiansburg. By 9 April (coincidentally the day of Lee's surrender) his men were back in North Carolina. At Germanton, north of Salem, he divided his command.

One brigade under Brig. Gen. William J. Palmer was detailed to capture Salem and then move eastward to cut railroads north and south of Greensboro. This was done swiftly, one column burning a bridge over Reedy Fork north of Greensboro, apparently only minutes after Jefferson Davis and the Confederate cabinet, fleeing Virginia, had passed over it. Other columns destroyed trains, bridges, a gun factory, and commissary stores between Greensboro and High Point. Still others sent to destroy rail bridges toward Lexington encountered stiff resistance and withdrew. All of this occurred on 11 April.

Meanwhile, Stoneman took the larger part of his command southward, rejoining Palmer's Brigade on 12 April at Salisbury. There they repeated the previous day's work on a much larger scale. Salisbury had become a major collection point for Confederate supplies and armaments of every kind. The Federal troops destroyed several miles of railroad track together with depots, warehouses, mills, arms and ammunition, and the recently vacated Salisbury Prison. The destruction consumed two days, and flames could be seen for 15 miles at night. Strong Confederate resistance beat off efforts to destroy a long railroad bridge over the Yadkin River north of town. Having accomplished most of what he set out to do, Stoneman headed back toward Tennessee. On the way his men burned more provisions at Statesville and Newton and another long railroad bridge over the Catawba River just inside South Carolina. They also plundered residents of Morganton and Asheville, although they generally confined themselves to legitimate military targets. The raid ended on 26 April, having lasted almost one month.