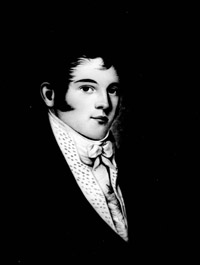 Richard Dobbs Spaight Jr. (1796-1850) was the son of Richard Dobbs Spaight, governor from 1792 to 1795, and was the last governor to be elected by the General Assembly. His mother was the former Mary Jones Leech of New Bern. The younger Spaight was educated at New Bern Academy and the University of North Carolina, graduating with high honors from the latter institution. In 1818 he was admitted to the bar and the following year represented Craven County in the House of Commons. Spaight then served in the state senate from 1820 to 1822, U. S. Congress from 1823 to 1825, and again in the state senate from the time he returned from Washington until he became governor in 1835. He never married.

At the state constitutional convention of 1835, while still a state senator from Craven County, Spaight served as chairman of the Rules Committee. Although the convention altered the way in which the governor would be elected in the future, the General Assembly was to elect the chief executive one last time. They elected Spaight. The following year, in 1836, as the Democratic gubernatorial nominee in the first popular election under the new constitution, Spaight was defeated by Edward Dudley. Typical of many candidates of that era who attempted to portray their interest in public office as a reluctant willingness to serve, Spaight declined invitations to banquets and rallies. The result was an unenthusiastic campaign that was not well received by the voting public.

After his gubernatorial loss, Spaight retired from politics and returned to his law practice in New Bern. He never held another public office. Income from his farms and other real estate holdings furnished him with the means necessary to practice law, primarily for charitable purposes. It was said that he continued his law practice not for professional success but because he enjoyed intellectual discussions of legal matters with colleagues. Spaight was an active Mason from 1822 through his governorship and beyond. He remained devoutly active in the state’s Grand Lodge when his local St. John’s Lodge fell into periods of inactivity. Spaight served the Freemasons as Grand Lecturer from 1833 through 1838 and as Grand Master in 1830 and 1831. He held various other offices and served on committees in St. John’s and the Grand Lodge, being as well versed in Masonic law as with the laws of the state. Spaight was also a member and vestryman of Christ Episcopal Church in New Bern.

Richard Dobbs Spaight Jr. died on November 17, 1850, and was buried in the family plot at Clermont Plantation, across the Trent River from New Bern. When the General Assembly meeting in Raleigh learned of Spaight’s death, they respectfully adjourned in his memory.

I know our speight name is

I know our speight name is aligned with Richard dobbs spaight sr. Our family has his walking cane and a dueling pistal. We also have internal information from the duel that took his life. We just have had a problem connecting him to us. Any information would be appreciated.

I am investigating my family

I am investigating my family background under Speight and I am lined to Spaight as well. Just wondering if the name had changed through the years to Speight?

It's a possibility, I'm

It's a possibility, I'm forwarding your query to our reference department who can better answer your question: http://statelibrary.ncdcr.gov/contact.html

Here's a list of all the Speights and Spaights we have articles on:

You can also try searching our Digital Collections for those names: http://digital.ncdcr.gov/cdm/