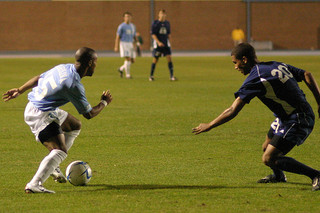 Soccer, known as football outside of the United States, is the most popular team sport in the world, although it was slow to gain popularity in North Carolina. The modern form of the sport was introduced in England in the 1830s and was played in parts of the United States shortly thereafter, especially in urban areas with large numbers of European immigrants. A handful of North Carolina high schools fielded soccer teams as early as the 1920s, and Duke University had a men's team in 1935. College soccer began to pick up momentum after World War II. The member schools of the Atlantic Coast Conference, which was formed in 1953, competed in soccer from its inception. Duke University, the University of North Carolina, and North Carolina State fielded men's teams in the 1950s. Wake Forest University did not field its first men's team until 1980.

The National Collegiate Athletic Association (NCAA) held its first soccer tournament in 1959, giving the sport a boost. Duke won the men's NCAA title in 1986, while the University of North Carolina at Chapel Hill captured the 2001 title. The University of North Carolina at Greensboro won the NCAA Division III national championship in 1982, 1983, 1985, 1986, and 1987.

In 1972 Congress passed the Education Amendments Act. Title IX of this bill mandated that universities receiving federal money fund women's sports equally with men's sports. This spawned a revolution in women's competitive sports and led to the establishment of what is arguably the most dominant collegiate sports program in history. The University of North Carolina at Chapel Hill started its women's soccer program in 1979 and captured the Association of Intercollegiate Women's Athletics title in 1981.

The following year, the NCAA began overseeing women's collegiate athletics. UNC won the inaugural NCAA title in 1982. From that period through the 2003 season, UNC captured 17 of 22 national titles, all won under the tutelage of coach Anson Dorrance. The UNC women's program has also produced the core of the U.S. national team. Mia Hamm, who played for UNC from 1989 through 1993, became the most accomplished female soccer player in history. UNC's success has overshadowed other women's soccer programs in the state, although several schools have competed well for decades. North Carolina State University in 1988 and Duke in 1992 were NCAA runners-up, both falling to UNC in the title game.

The North Carolina High School Athletic Association (NCHSAA) held state soccer championships for boys on a sporadic basis beginning in 1927 and annually beginning in 1966. Girls' state championships were inaugurated in 1986. All but the smallest high schools field soccer teams for both boys and girls. In the 2002-3 academic year, 8,539 boys and 7,317 girls played for NCHSAA soccer programs. Soccer is also an extremely popular youth sport in North Carolina. In 2006 thousands of children participated in the North Carolina Youth Soccer Association, while many others played for other organizations.

i love soccer and read this

i love soccer and read this and i like it more