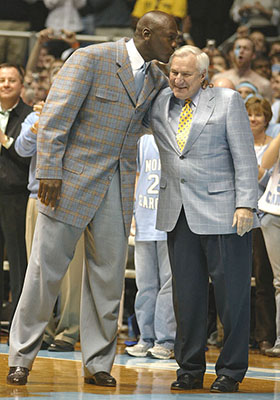 Dean Edwards Smith was the head Men’s Basketball Coach at the University of North Carolina at Chapel Hill from 1961 until 1997. At the time of his retirement, he had more wins than any basketball coach in Division 1 history, as well as two national championships and an Olympic gold medal.

Born in Emporia Kansas, Smith was the son of public school teachers. He graduated from the University of Kansas in 1953 and served as an Assistant Coach there before joining the Air Force. He was the Assistant Coach for the Air Force Academy until 1958, when he joined the Basketball staff at the University of North Carolina. He was promoted to head coach in 1961. His first year as coach of UNC was the only losing season of his Head Coaching career.

While at Carolina, Smith became known for his strategy and tactics, including the creation of the Four Corners offense, the foul-line huddle, the fatigue signal, and the run-and-jump defense. His coaching style was also noted for emphasizing teamwork and humility, which came to be called the ‘Carolina Way.’ Over 95% of his players would graduate from the university.

Smith was also noted for his political and social convictions. During segregation, he actively recruited African American players to his team, and in 1967 gave one of the first scholarships to a black athlete in the South.

Under Smith, Carolina won two national championships (1982, 1993) and made the final four eleven times. He won 13 ACC tournament titles and was named the ACC Coach of the Year 8 times. Additionally, he was head coach for the 1976 Gold-medal winning US Basketball team at the Montreal Olympics. He was appointed to the Basketball Hall of Fame in 1983, and when Carolina opened their new basketball arena in 1986, it was titled the Dean E Smith Center.

Smith retired in October of 1997 with a career record of 879-254, at the time the most wins of any Division 1 coach. He was awarded the Presidential Medal of Freedom in November of 2013 by President Barack Obama. Dean Smith died on February 7, 2015 in Chapel Hill at the age of 83, leaving behind his wife Linnea and five children.