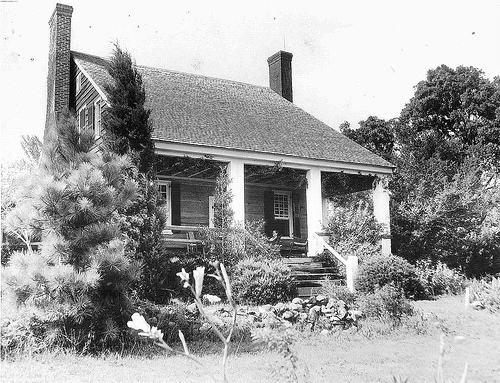 Sloop Point Plantation, located in eastern Pender County, was constructed around 1726, making it the oldest surviving house in North Carolina. John Baptista Ashe acquired a land grant including an estimated 1,000 acres, extending across what is today U.S. 17 to the Intracoastal Waterway. The name derived from an early shipyard and port that served as a center for sloops arriving in the region from other colonies, the Caribbean, and England. The sloops made landfall at the plantation.

A single broad roof of long rafters integrates the piazza into the main room structure of the house, a feature typical of the Caribbean trading areas. Between two interior fireplaces serviced by one large chimney, twin doors lead to an outside porch. The doors swing in and out from the corners of the fireplaces in such a way that one room at a time opens to the porch. When fastened at an angle, the doors provide a passageway from room to room. Another unusual feature of the house is its ingenious cooling system. Near the rear of the house is a hole in the floor that allows cool air from underneath to ventilate a bedroom. At the front of the house, an opening in the porch ceiling allows air to rise to a closet on the second floor and into the front bedrooms.

The plantation operated an early saltworks. The process involved taking salt water from nearby waterways and allowing the water to evaporate in large cast iron pans left out in the sun. The salt residue, or brine, was then collected for distribution. Salt sold for as much as $64.00 per bushel during the Civil War. It was an essential staple much in demand, especially for preserving meats. Rusted relics of early salt pans can still be found at the plantation. Local legend maintains that pirates buried their treasure at Sloop Point, although such treasure has never been found.

A careful restoration of the old plantation house was completed in 1989. The interior of the house still retains much of the colonial wood flooring, paneling, doors, and windows.

What go me interested in this planation was a post card I bought on e-bay of the Edgewater Beach Hotel Dining Room in Chicago. It was sent to Miss JoAnna Mc Millan of Sloop Point Plantation Hampstead North Carolina. It was send in 1949. It was telling how much she love this hotel. So I decided to look up the planation to see what it looked like. When I saw Barbara's above note, I thought I would send my information.

I cleaned house for Ms.Nellie

I cleaned house for Ms.Nellie Mcmillian who lived in this house when I was a young adult. This house has so much history that makes it so unique . So glad I had a chance to see this house in 1970s.