by University of North Carolina Libraries 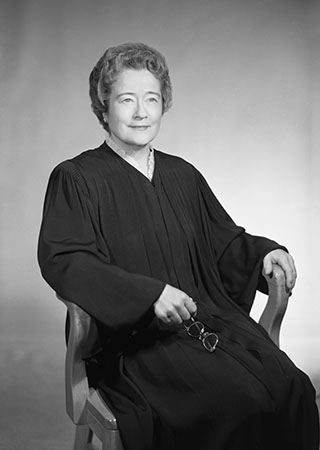 James Merritt Sharp was born 26 September 1877. In 1900, he established Sharp Institute, a co-educational day and boarding school. The school burned down in 1907. Sharp had been studying law, and the end of his teaching career led to one as a lawyer. Sharp passed the Supreme Court's bar examination in 1908. In 1914, he moved his practice to Reidsville, N.C., where he remained for the next 38 years. He served in the North Carolina State Senate in 1925 and 1927, representing the 17th district.

Susie Marshall Sharp, the couple's first child, was named after her mother's younger sister Susie and her Civil War grandfather, James Marshall Sharp. Susie Sharp attended Reidsville public schools from 1914 to 1924. An excellent student and a champion debater, she was chosen class salutatorian. Following her graduation from high school in 1924 and her entrance to the North Carolina College for Women (now the University of North Carolina at Greensboro), Sharp developed an interest in chemistry. In part because of her debating ability, however, she had been encouraged to become a lawyer, and, in 1926, following an all-night session of wrestling over her decision, she chose law over chemistry.

In 1926, Sharp entered the School of Law at the University of North Carolina, the only woman in her class. She soon encountered the entrenched attitudes of the time that opposed women being lawyers. In spite of the obstacles, Sharp became an editor of the North Carolina Law Review and a member of the Order of the Coif. She received her LL.B. degree with honors in 1929. Sharp passed the bar examination in 1928 while still in school and returned to Reidsville in 1929 to practice law with her father. In the early 1930s, Sharp served as secretary and legal researcher at the University of North Carolina School of Law. As a female lawyer Sharp was a rarity at the time; women were not allowed to serve on juries in North Carolina until 1946.

Sharp was appointed Reidsville's city attorney in 1939. In 1948, her growing influence in the governmental and political affairs of Rockingham County led her father's friend, Kerr Scott (William Kerr Scott), to appoint her as his campaign manager for Rockingham County in the Democratic primary for governor. In the summer of 1949, Governor Scott appointed Susie Sharp to the North Carolina Superior Court bench, making her the first female judge in the history of the state. Judge Sharp's first term established her interest in prison conditions, a concern she maintained for the remainder of her career.

Governor Terry Sanford appointed Sharp to the North Carolina Supreme Court on 9 March 1962. Justice Sharp's appointment made her the first female member of the North Carolina Supreme Court and only the second associate justice from Rockingham County, Thomas Settle having preceded her nearly 100 years earlier in 1868. She was elected in November to fill the remainder of Associate Justice Emory Denny's term, and, in 1966, she was elected to a full eight-year term.

Forced by a newly enacted retirement law to retire in 1974, Chief Justice William Haywood Bobbitt and the rest of the court encouraged Sharp, as the senior associate justice, to seek the chief justiceship. In 1974, she became the first female in the United States to be elected chief justice of a state supreme court, garnering 74 percent of the vote.

Chief Justice Sharp successfully advocated for a constitutional amendment, passed in 1980, requiring that all judges be lawyers, after having faced fire extinguisher salesman James Newcomb as her Republican opponent for the chief justiceship.

Sharp received many honors, beginning in 1950 with an honorary LL.D. degree from the North Carolina College for Women. She received an honorary L.H.D. degree from Pfeiffer College in 1960 and honorary LL.D.s from Queens College in 1962, Elon College in 1963, Wake Forest College in 1965, Catawba College in 1970, the University of North Carolina at Chapel Hill in 1970, and Duke University in 1974. In 1952, the February issue of theLadies Home Journal recognized her as one of the thirteen outstanding women in public office throughout the country. Twenty-four years later, she was selected by Time magazine in its 6 January 1976 issue as one of twelve women of the year for 1975.

Sharp's accomplishments resulted in a series of awards from women's organizations including the 1959 Achievement Citation from the North Carolina Federation of Business and Professional Women's Clubs, the Distinguished Service Award for Women from the Chi Omega Sorority in 1959, the Alumni Service Award from the University of North Carolina at Greensboro in 1975, and the Special Award for Outstanding Legal Achievement from the New York Women's Bar Association in 1976.