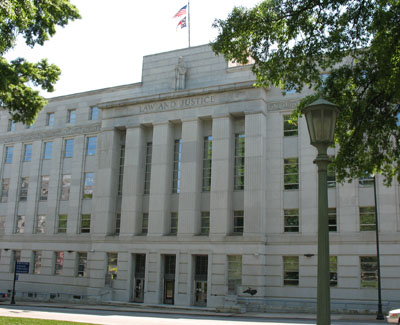 Article IV of the North Carolina Constitution establishes the General Court of Justice, which "shall constitute a unified judicial system for purposes of jurisdiction, operation, and administration, and shall consist of an Appellate Division, a Superior Court Division, and a District Court Division." The Constitution also states that the "General Assembly shall have no power to deprive the judicial department of any power or jurisdiction that rightfully pertains to it as a co-ordinate department of the government, nor shall it establish or authorize any courts other than as permitted by this Article."

The Appellate Division consists of the Supreme Court and the Court of Appeals.

The Supreme Court is the state's highest court. This court has a chief justice and six associate justices, elected to eight-year terms, who hear oral arguments in cases appealed from lower courts. The Supreme Court considers errors in legal procedures or in judicial interpretation of the law. Its case load consists primarily of cases involving questions of constitutional law, legal questions of major significance, and appeals from convictions imposing death sentences in first-degree murder cases.

The Superior Courts are the general jurisdiction trial courts for the state. All felony criminal cases, civil cases involving more than $10,000 and misdemeanor, and infraction appeals from District Court are tried in Superior Court. A jury of 12 hears the criminal cases. In the civil cases, juries are often waived. The Superior Court is divided into eight divisions and 46 districts across the state. Judges are elected to 8 year terms, and rotate every six months between the districts within their division.

Administrative Office of the Courts

All North Carolina courts, at whatever level, are overseen by the Administrative Office of the Courts (AOC). The basic responsibility of the AOC is to maintain an effective and efficient court system, supporting the courts through technology, personnel, financial, legal, research and purchasing services. The AOC prepares and administers the court system's budget and currently employs more than 400 people.

Justice Building, Raleigh, 2010. From the State Library of North Carolina, Raleigh, NC. https://statelibrary.ncdcr.gov/. This image is in the public domain.