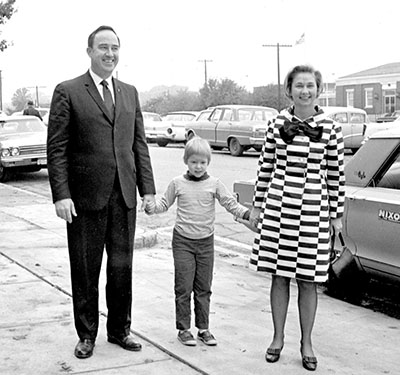 When Robert Walter Scott became governor, he was following in his father's footsteps (Governor William Kerr Scott). Robert Scott's wife, Jessie Rae Osborne Scott, became familiar with the role of first lady and the Executive Mansion during her frequent visits with his parents. Robert was attend­ing Duke University when his father, W. Kerr Scott, became governor. He transferred to North Carolina State University and continued his courtship of Jessie Rae Osborne, which had begun in the fourth grade. When they married on September 1, 1951, they spent their wed­ding night at the Executive Mansion, and his parents honored them with a party.

Jessie Rae Scott, the youngest in a family of seven children, was born October 12, 1929, to Albert LeRoy and Rosa Cassidy Osborne. When she was eight years old, her mother died, and she moved from Massey Hill (near Fayetteville) to Swepsonville in Alamance County to live with her oldest sister. That mill village provided few employment opportunities for the bright young lady. Wanting to continue her education and encouraged by her employer and teachers, she worked and ultimately borrowed money from her future husband, which she paid back before the marriage, to attain that goal. With a degree in business education from Woman's College (now the University of North Carolina at Greensboro), she taught at Alexander Wilson High School, where she and Scott had been classmates and sweethearts. After their marriage, Robert Scott still had to finish his studies at CSU and his military ser­vice, and she continued to teach for three years.

Life in their dairy-farm home changed with the arrival of five children. Twin girls, Mary Ella and Margaret Rose (Meg), were the first to arrive. They were born on February 18, 1956. Susan Rae was born on April 3, 1957, followed by William Kerr on February 28, 1958, and Janet Louise on March 3, 1963. Having grown up in the midst of six siblings herself , Jessie Scott was accustomed to the rigors of a large household. Busily raising their chil­dren, she also found time to grow vegetables, which provided food for freezing, canning, and pre­serving. The farm provided a wholesome environment for the children and gave them experiences with animals, plants, and a vast area in which to play. She was active in the Hawfields Presbyterian Church, as her hus­band 's family had been since its establishment more than two hundred years before.

Her role in the community ranged from state Grange membership, to helping with the Red Cross bloodmobile and PTA fund drives, to chairing the state Cancer Crusade. When her husband ran for lieutenant governor, Jessie Scott set up an office in the house and worked on mailings, telephoning, and correspondence. In that way she was able to stay at home with the children and still assist her husband in achieving his political goal. During the gubernatorial race, however, with the stamina and dedication of a seasoned politician, she campaigned with her husband or took solo trips to give speeches and meet prospective voters. Education was extremely important to Jessie Rae Scott. As first lady she supported her hus­band's program to make kindergarten part of the state's public school system. Since she knew how important early education was for rural and small communities and that most residents of such places could not afford to send their children to private kindergarten, that issue became especially meaningful for the first lady. She also produced a guide booklet for children visiting Raleigh and the governmental complex. Teachers and parents who accompa­nied the youngsters to Raleigh appreciated her effort to enrich the children's experiences in the capital. Once, during her tenure as first lady, Jessie Scott substituted at Daniels Junior High School, probably embarrassing her daughter Susan, whose class needed a teacher. Again focusing on children, the first lady, along with the State Library, held a "Story Festival" on the grounds of the mansion for more than one hundred children.

Jessie Scott joined the state's Church Women United to raise fifty thousand dollars to match the General Assembly's appropria­tion for the expansion   of the chapel at the girls' rehabilitation center at Samarcand Manor in Eagle Springs. Continuing her fund-raising efforts in 1971, Jessie Rae Scott held the first "pyramid party" to raise money for the North Carolina Symphony.

The first lady served as an ambassador for the state abroad. She traveled with her husband to France, Japan, and South America. In addition, she and some of their children visited Italy with the North Carolina School of the Arts summer program.

Jessie Scott brought changes to the structure and holdings of the Executive Mansion. A play­ room and billard table were installed in the unfinished third floor, providing a play area for the Scott children. The perimeter fencing, brick wall, and driveway gates were built with an appropriation following a plan devised during the Moore ad­ministration. Jessie Scott over­ saw the screening of the east porch and the redecorating of several rooms. At her encour­agement, one hundred place settings of official state china were purchased, along with as many settings of silver-plated flatware.

The governor and first lady brought attention to the inad­equacies of the Executive Mansion. The mechanical systems had been augmented in a piecemeal fashion over the eighty years since the mansion had been built. To garner support for the revitalization of the Victorian structure, they spoke of the feasibility of building a new official residence outside of the downtown area and turning the present mansion into a museum or an official guest house. Reactions were numerous and strong in the press and within the Executive Mansion Building Commission for some time. Eventually an appropriation was made to renovate and partially restore the Executive Mansion.

For the presidential inaugural ball in Washington, Jessie Scott decided to show off one of the state's outstanding industries by wearing the newest man-made fiber, Dacron polyester­ spun in Kinston, woven in Burnsville, and then fashioned into a dress by Doncaster in Rutherfordton.

In a speech to the Raleigh Junior Woman's Club, quoted in the Raleigh News and Observer, Jessie Scott summed up her beliefs: "'There are three kinds of doing,' she said.  'One is doing that that one has to do. Also important is doing what one wants to do. The third,' she continued, 'is altruistic-doing for another person. Much inner joy and satisfaction comes from service projects."

After her days as first lady, Jessie Scott ran for political office as commissioner of labor but lost in the second primary. She then was employed for a number of years in the Department of Public Instruction in Raleigh, retiring in 1990. During those years her husband was president of the North Carolina Community College system. Melville Farms continued to grow and strengthen the family base in Alamance County.

Governor and Mrs. Scott have at least one politician among their children. In May 2000, Meg Scott Phipps (Mrs. Robert Eugene Phipps) won the Democratic primary for North Carolina commissioner of agriculture and consumer services. Her grandfather, W. Kerr Scott, had held the same position for eleven years, beginning in 1936, before he became governor in 1949. The family's dual legacy of agriculture and politics continues. During the campaign the former first lady baked for the campaign volunteers and worked in the office as time permitted. It was said of this first lady in the January 1970 issue of the Progressive Farmer: "Few of us have begun our lives under less fortunate circumstances than did Jessie Rae Scott, and few of us can hope to attain such a position of honor, dignity, and responsibility as she now holds. But Jessie Rae Scott is truly a lodestar for North Carolina women to follow - especially rural women."