Sam Brinkley and His Beard 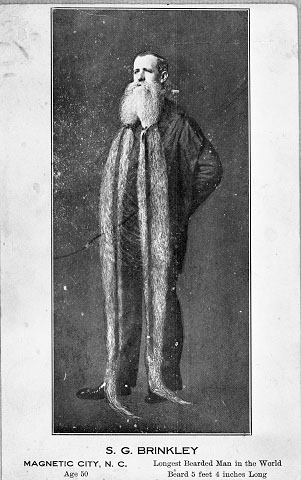 Standing six feet two with a beard of five feet four inches, Sam Brinkley became known for one of the world’s longest beards in the early 20th century.   Brinkley was born on September 21, 1850 near Burnsville in Yancey County to Alex Brinkley and Annie McColl. The family later moved to Mitchell County, and Brinkley lived there in Magnetic City (now Buladean) earning a living as a teacher and then as a farmer, according to census records.  Notoriety came with the remarkable growth of his beard, as he began to exhibit it to the curious and later by touring with the Barnum and Bailey Circus.  He reportedly earned thousands of dollars charging to show his beard, which he kept out of the way in a pouch.

Brinkley’s beard was a late bloomer.  According to newspaper accounts, until he was twenty one he had no beard to shave, then shaving only once a week to remove light fuzz.  By twenty three, the growth had reached the astounding rate of a full beard in a week’s time.  One article reported that the beard was entirely natural, not the result of restorers or invigorators.  Another reported on its quality -- “soft and beautiful, indicating a peculiarly fertile state of nourishment.”

Brinkley may not have had the longest beard, with others in the contest. Robert Latter, of Wells, England claimed to have grown his an extraordinary sixteen feet, wearing it wrapped around his waist.  Columnist Ann Landers even joined in the debate in 1972 as readers chimed in with accounts of the longest beard.