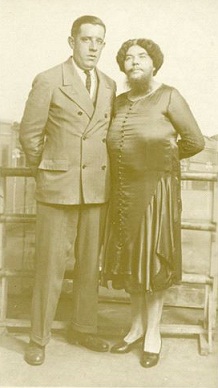 Beards of two North Carolinians attracted worldwide attention during their lifetimes. Sam G. Brinkley (1850-1929), a schoolteacher at Magnetic Hill (renamed Buladean) in Mitchell County, had facial hair that grew so fast he gave up shaving while a young man. As his beard grew to his waist, he began attracting attention, and when it reached his knees and toes, he claimed to have the longest beard in the world. He was such a curiosity, in fact, that he wore his rolled-up beard beneath his shirt and charged a dime to reveal it. He was about 40 years old when he was hired by the Barnum & Bailey Circus, and during the next two decades he was exhibited throughout the country as the world's authority in pogonotrophy, or the cultivation of beards. He made extra cash by selling picture postcards of himself. Embedded in his tombstone at the Presbyterian Church in Buladean is a photograph revealing his flowing beard, nearly six feet long. 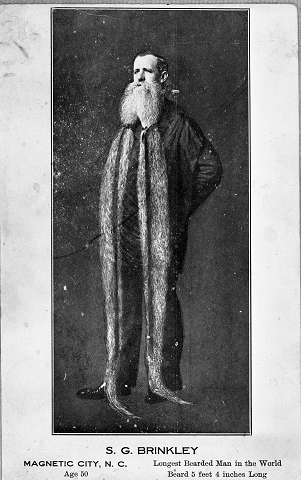 Beards are usually associated with men, but a North Carolina female also became famous for facial hair. Jane Barnell, born in Wilmington in 1871 with heavy down on her face, was an embarrassment to her mother, who, while her husband was away on an extensive trip, sold the child to a small circus as it passed through the town. Jane, billed as a bearded princess throughout the southern states, was taken to Europe later and, during a serious illness, was committed to an orphanage. When George Barnell learned of his daughter's whereabouts, he retrieved the girl and gave her to his mother-in-law, a Catawba Indian living in Mecklenburg County. There Jane grew to womanhood, regularly shaving off her beard as if she were a young man. A neighbor, William Heckler, a seasonal strongman with the John Robinson Circus, persuaded Jane to accept her beard as a gift of nature and to join the traveling circus. Thus, at age 21 she was unveiled to the world as "Lady Olga, the Bearded Woman." With that title, she was employed later by other circuses, and in 1932 she played the role of the bearded lady in Tod Browning's infamous film Freaks. She gave her last circus performance with the Ringling Brothers Circus in New York in 1938 but continued until her death to appear in dime museums in and around the city.