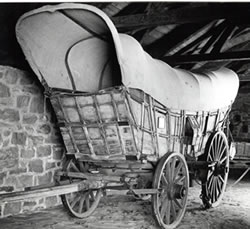 before the advent of the railroad to haul produce to market and carry other goods and supplies. Often operated as a business by two or more men, these wagons followed trails or roads from the backcountry to such centers of commerce as Fayetteville, Wilmington, Petersburg, Va., or Charleston, S.C., and later to the railroad. Some occasionally took passengers. On 6 Dec. 1815 one couple traveled from Bethabara to Salem to attend a meeting, but the onset of rain, snow, and sleet compelled them to return home "in a freight-wagon" that they encountered in Salem "and which was coming this way."

Bennehan Cameron recalled a black man named George, born in 1790 on the plantation of Cameron's grandfather, who "had all his life charge of the road wagons to Petersburg . . . and then to Henderson after the completion of the old Raleigh and Gaston Railroad, so that he knew everybody along the road and everybody knew him." In Salisbury, the Yadkin and Catawba Journal (25 Feb. 1829 and 26 Nov. 1832) advertised road wagons for sale from the estates of the late Nicholas Filhowar and John Pool, respectively; the estate of Abel Cowan of the same county (1844) also included a road wagon.