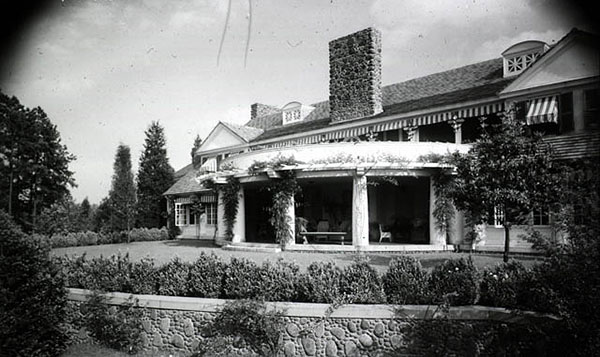 In 1914 Richard J. Reynolds, founder and president of Reynolds Tobacco Company, and his wife, Katharine Smith Reynolds, hired Philadelphia architect Charles Barton Keen to draw up plans for an English-style village and manor house to be located on 1,067 acres that Reynolds purchased on the outskirts of Winston-Salem. Reynolds planned the village to be self-sustaining for the needs of his family and estate workers, most of whom would live on the grounds. The village included a church, post office, greenhouse, blacksmith shop, dairy, school, administrative offices, barn, and a formal garden designed by Thomas Sears of Philadelphia. All buildings and homes were constructed of white stucco with green tile roofs.

Much of the original acreage was later sold, and 300 acres of the estate were given to Wake Forest College in 1951. The college, now Wake Forest University, opened its Winston-Salem campus in the summer of 1956. The village buildings and some of the cottages have become specialty shops and restaurants, but all retain their white stucco facades and green tile roofs. The main house and 20 acres around it were not included in the gift to Wake Forest.

The manor house was built in the unpretentious bungalow style popular in the first quarter of the twentieth century rather than the extravagant showplace architecture customary for great estates. Like the village buildings, it is white stucco with a green tile roof and consists of 40,000 square feet and 100 rooms. R. J. Reynolds's daughter Mary Reynolds Babcock and her family lived in the manor house until 1964, when her husband, Charles Babcock Sr., donated the property for use as a nonprofit art and education museum. Their daughter, Barbara Babcock Millhouse, granddaughter of R. J. Reynolds, was instrumental in collecting an important group of representative American paintings, including work by John Singleton Copley, Thomas Eakins, Mary Cassatt, and Georgia O'Keeffe. The collection, which opened to the public in 1967, has been called "the finest concentration of American art in a public collection south of Washington, D.C."

Reynolda House is furnished as it was when the Reynolds family lived there, and visitors can sit in easy chairs or on sofas while viewing the paintings on the first two floors of the house. The museum acquires new paintings occasionally, and special exhibits are loaned from other museums. Other collections include Doughty birds and American art pottery, and on the third floor of the house, a costume collection includes dresses and accessories dating from Mrs. R. J. Reynolds's 1905 wedding suit to clothes worn by the Reynolds children in the 1920s.

Education programs relating American art of different periods to literature and music of the same periods are an important part of the year-round offerings of Reynolda House. They are geared to different age groups from kindergarten to senior citizens, as well as to groups with special needs. Reynolda House is included in the National Register of Historic Places and accredited by the American Association of Museums.