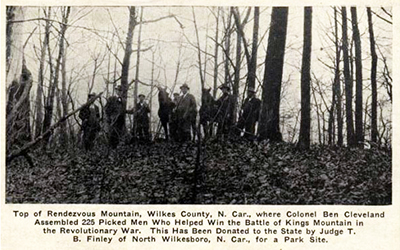 The land, originally around 142 acres, was donated to the state in 1926 by Judge Thomas B. Finley of North Wilkesboro for the development of an historical park based on local lore connecting the site to the American Revolution and the Battle of Kings Mountain. It was believed that several companies, possibly more than 200 men from Wilkes County, volunteered were organized at Rendezvous by Colonel Benjamin Cleveland for march to Kings Mountain, although the historical claims were never substantiated. The name of the mountain is said to come from its use as a rendezvous point prior to the march to Kings Mountain.

Original suggestions for the park included that, in addition to recreational use, the mountain become an historic or patriotic shrine to be sponsored by the Daughters of the American Revolution. Judge Finley supported the idea which included the placement of a monument by the DAR to the patriots on the site.

By the 1930s funds for a road had been appropriated, bringing picnickers and hikers to trails, although there were no established park facilities. Rendezvous Mountain was authorized as a state historical park in the 1930s but later transferred from state parks to the state forest service in 1956.  It opened as one of the state's educational forests in 1984.

[Postcard of men on top of Rendezvous Mountain.] ca. 1920s. Item H.19XX.327.74 from the North Carolina Museum of History Collection.