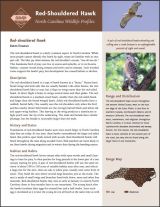 Small mammals up to the size of a squirrel or small rabbit, frogs, snakes, turtles, crayfish, some small birds and insects.

Return to same territory year after year to breed. Usually do not breed until 2 years old. Nest once each season. 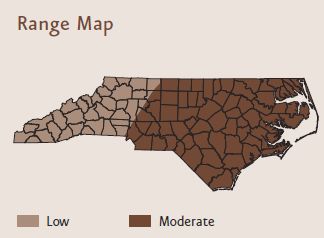 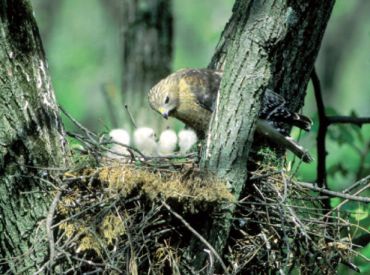 The red-shouldered hawk is a fairly common raptor in North Carolina. While most people cannot identify this hawk by sight, many are familiar with its twopart call. The blue jay often imitates the red-shoulder’s scream, “kee-ah kee-ah.” This handsome bird of prey can live in towns and suburbs, or in its favorite habitat—mature woods along streams and rivers and in swamps. Such wooded zones support the hawk’s prey, but development has caused habitat to decline.

Populations of red-shouldered hawks were once much larger in North Carolina than they are today. At one time, these hawks outnumbered the larger red-tailed hawk that prefers open lands mixed with woods. Red-shouldered hawks still breed throughout the state along wooded rivers. Bird-watchers are more likely to see these hawks during migration and in winter than during the breeding season. 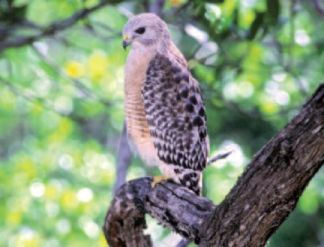 The red-shouldered hawk favors stream sides with open woods and small clearings to hunt for prey. It often perches for long periods in the lower part of a tree canopy waiting for prey. A pair of red-shouldered hawks will use the same territory of about 100 to 150 acres of suitable habitat year after year, and selects a large tree for the nest, often an oak or white pine, usually near some form of water. They build the nest where several large branches join at the trunk. The nest is made of small twigs and branches lined with down, moss and other fine materials. Red-shouldered hawks may nest as early as January in eastern North Carolina; three to four months later in our mountains. The young hatch after the hawks incubate their eggs for around four and a half weeks. Since each egg is incubated as it is laid, the young do not all hatch at the same time as with some other hawks. As a result, each nest has different-sized young. The adults care for their young in the nest until they are about six weeks old. They continue to feed their young after the family has departed from the nest. The young are able to care for themselves in about eight to 10 weeks after leaving the nest.

Sometimes the red-shouldered hawk nests in suburban areas, giving residents an opportunity to watch nesting hawks closely. The birds are fairly noisy when courting and building their nests. A pair of binoculars will let you spy on this hawk without bothering it. A pair of red-shouldered hawks wheeling and calling over a creek bottom is an unforgettable portrait of sight and sound.

The red-shouldered hawk, along with many other raptors has the unfortunate reputation of being a “chicken hawk.” As a result, hawks are sometimes shot due to this common misconception.

The Migratory Bird Treaty Act, a law passed by Congress, prohibits the killing of red-shouldered hawks as well as other migratory nongame birds. These hawks do not damage economic interests. 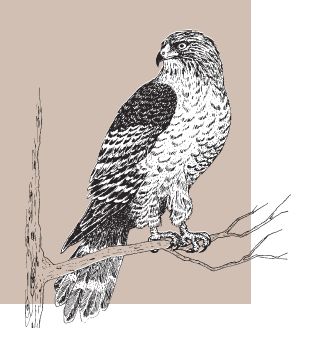 Under federal and state law, it is illegal for anyone to injure, harass, kill or possess a bird of prey or any parts of a bird of prey. This includes harming or removing a nest. If you find an injured hawk, contact a licensed wildlife rehabilitator.

Hawks may suffer from improper pesticide use when they feed on prey that has been exposed to pesticides or feed on other animals that have ingested pesticides. Limit the use of pesticides when possible and always use according to directions on the label.

Produced 2011 by the Division of Conservation Education; Cay Cross-Editor.