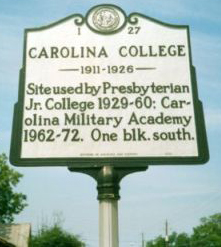 The Presbyterian Junior College for Men was established in 1927 by the Presbyterian Synod of North Carolina and Fayetteville Presbytery. In 1928 the trustees acquired the campus and properties of Carolina College for Women in Maxton, and the school was opened on 11 Sept. 1929 with 84 students. The first president was R. A. McLeod, former superintendent of Elise Academy in Elise (now Robbins). McLeod died in 1932. He was succeeded by R. G. Matheson Jr., and later by Cary Adams. By rigid economy and local support, the school survived the Great Depression, and a strong curriculum in business training was established.

In 1938 Louis C. LaMotte became president and served for the next 23 years. A challenge gift of $20,000 in 1939 by W. H. Belk of Charlotte and R. L. McLeod of Maxton, and matching funds from the synod, placed the school on a sound financial basis, and it continued to grow. In 1939 the Civil Aeronautics Authority established a Civilian Pilot Training Program at the school, which later became part of the War Training Service as World War II approached. This brought students from across the United States to the school. Elise Academy was merged with Presbyterian Junior College in 1940.

The college reached its peak enrollment of 503 students in the years immediately following World War II. It continued to operate until 1961, when it and Flora MacDonald College were merged into the newly created St. Andrews's College at Laurinburg by the Synod of North Carolina. Carolina Military Academy operated on the campus from 1962 to 1969, and the main building burned in 1973.

Maud Thomas, Away Down Home: A History of Robeson County, North Carolina (1982).