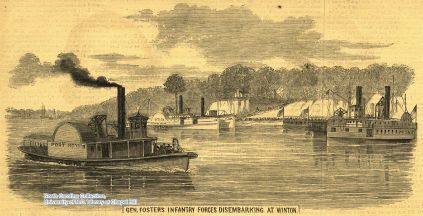 The Battle of Potecasi Creek, also called the Battle of Mount Tabor Church, was a Civil War skirmish in Hertford County that occurred on 26 July 1863, while elements of Maj. Gen. John G. Foster's Union expedition made their way toward the Confederate rail junction at Weldon. Advancing up the Chowan River from Roanoke Island, a Federal force landed at Winton and set out for Murfreesboro, ten miles north. Three miles outside of Winton, the advanced guard was ambushed as it approached Hill's Bridge on Potecasi Creek. The attackers were members of the dismounted Fourth North Carolina Cavalry Battalion, recently recruited in Hertford and Northampton Counties and led by Maj. Samuel J. Wheeler of Murfreesboro. Wheeler's men fired from wooded cover on both sides of the road before retreating across the bridge to a prepared entrenchment 100 yards long on the northern side of the creek. Union troops found the planking thrown from the bridge floor, but, under the cover of friendly fire, they were able to cross on the stringers and take a dozen or so Confederate prisoners.

At least one Confederate was killed and several men on both sides were wounded, with the remaining defenders scattering. Two days later the Union advance was turned back at the Battle of Boon's Mill by Col. Matt W. Ransom's 34th North Carolina Regiment.