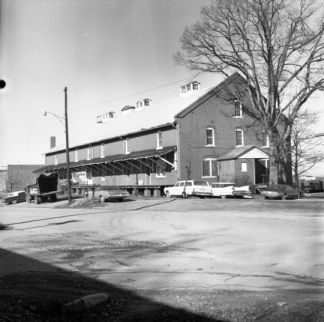 The Piedmont Wagon Company was founded in 1878 outside of Hickory by George G. Bonniwell, a mechanical engineer, architect, and builder, and A. L. (Andy) Ramseur, operator of a gristmill, an iron forge, and a sawmill. They formed a partnership and began small-scale construction of wagons, becoming one of the area's first industrial enterprises. Two years later the firm moved to the western part of Hickory for access to a railroad and to obtain additional capital. By 1890 it had an investment of more than $100,000 in land, machinery, and raw materials, and demand for its wagons was so great that the company inaugurated a night shift (probably Hickory's first).

Under the direction of G. Harvey Geitner, plant superintendent from 1887 to 1918, Piedmont's primary market was extended throughout the southern states from Virginia to Texas and eventually to Great Britain. By World War I the company received a contract for all-metal carts for the French army. It was said that Piedmont rivaled the work of leading wagon companies in St. Louis, the center for the industry.

Following a series of ownership changes, Piedmont Wagon Company became involved in a tax controversy and subsequent lawsuit stemming from its failure to pay income taxes from 1917 to 1919. The firm was sold to Henry Leonard in the 1940s, the era that production ground to a halt. The tax problems did not end, and a series of tax liens were placed on the property beginning in 1948. The Hickory Development Corporation bought it, intending new industrial and business sites. In August 1960 the site, which a local paper called a "rat-infested jungle," was bulldozed. Overshadowed perhaps by the tax problems was the fact that Piedmont Wagon Company was a victim of its owners' apparent failure to foresee the automobile's impact on horse-drawn wagons and carriages.

We have a wagon that might be a Piedmont . It is kept indoors and in excellent condition. Would consider selling it.
The wooden wheels are in tact, brakes, sides, tongue ; it has tall sides. I think it may have served as a cotton or grain wagon.

Hello, We have one of the

Hello, We have one of the original Wagons on the plantation that I work at and like to know more information I can send you pictures also?

Thank you for your comment! How neat that you have one of the original wagons! Please note that this is an encyclopedia article about the Piedmont Wagon Company and that you have reached the Government & Heritage Library, part of the State Library of North Carolina. Unfortunately, the Piedmont Wagon Company went out of business around 1948: https://www.ncdcr.gov/blog/2017/08/17/piedmont-wagon-company-keeps-army-....

We would be happy to assist you in your research! What kind of information are you looking for? Please feel free to respond back to this comment or contact our library:  https://statelibrary.ncdcr.gov/contact-us.

Your info on Daniel Efrid

Your info on Daniel Efrid Rhyne states that he owned the Piedmont Wagon Co., but no mention of that appears here. Did Rhyne own the wagon co. or not? Feel free to respond to my email address. Thanks.

Thank you so much for taking the time to visit NCpedia and pointing this out to us. I am copying our Digital Team on this email so that they can determine if they can change the content of the article. It is through suggestions like yours’ that help make NCpedia a better resource.