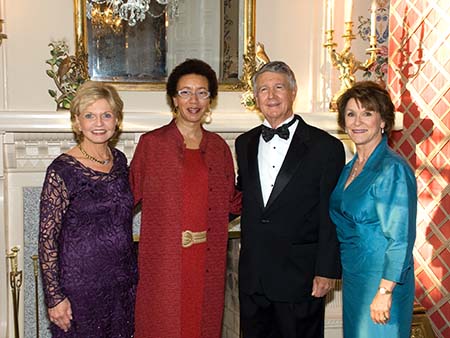 Bev Perdue was born Beverly Marlene Moore in Grundy, Virginia, where her father was a coal miner and later a coal company owner and utility company CEO. She graduated from the University of Kentucky with a bachelor's degree in 1969 and earned a master’s in education at the University of Florida in 1974. She worked as a school teacher, and after studying community college administration and working with the elderly as a health care consultant, she earned a Ph.D. in education administration in 1976. As a former public school teacher, she advocated for public education while in elected office.

Purdue joined the state legislature in 1987, first as a representative and later as a senator, continuing to serve for seven terms through 2001. She then became the state’s first woman lieutenant governor before ascending into the state’s highest executive position.

In a 2018 interview, Perdue described her early motivation to achieve as an educator and leader: “I was poor as a little girl. My dad was a coal miner, my momma didn’t have an education, and they wanted better for my brother and me. And [in seventh grade] I had this teacher, this one woman changed my life. She told me I could be more than I thought I’d be, but it was going to require some grit — persistence and conscious learning. I didn’t know those words, but I knew I wanted to be somebody.”  She left Grundy for college—beginning at Mary Washington in Fredericksburg, Virginia, and then transferring to complete her bachelor’s degree at the University of Kentucky.

Her route to North Carolina politics was circuitous. She dropped out of law school to elope with her first husband, a decision she regretted. Soon after Perdue completed her graduate studies and her husband had finished law school in Florida, they visited her brother who was then a doctor for the Navy at Cherry Point. They stayed in New Bern and fell in love with its beauty and “magic” and chose it as the place to raise their two sons and begin their careers. After more than twenty years of marriage to her first husband, she divorced and later married Bob Eaves, taking his last name for her middle name in 1997.

Perdue made the leap into politics out of frustration with contemporary legislators and the belief that she could do a better job. In the mid-1980s, while working at the Craven County Hospital, she traveled to Raleigh to lobby for program funding. After the legislators rebuffed her and ignored her pleas, she hired campaign consultants and ran for office herself.

Perdue’s gubernatorial administration focused on technology in education and the economy, as it confronted the worst economic climate since the Great Depression.  During her administration, she launched the Governor’s Task Force to Determine the Method of Compensation for Victims of North Carolina’s Eugenics Board, she issued an executive order to expand Pre-K education, and she issued full pardons for the Wilmington 10, ten individuals who were wrongfully convicted in 1971 of arson and conspiracy in Wilmington, North Carolina. She declined to run for a second term.

Her experience as the state’s chief executive informed her subsequent professional pursuits. She believes that mechanization will replace most service jobs and that technological training and adaptive learning platforms will be the foundation of the future workforce. After leaving office in 2013, she founded DigiLearn (the Digital Learning Institute) a nonprofit that funds specialized training for teachers to help them engage student learning through technology. Purdue has also served as a resident fellow at the Harvard School of Politics and as a distinguished visiting fellow at the Sanford School of Public Policy at Duke University.

Along with a team of co-authors, as of 2019 Beverly Purdue is writing a book describing her experiences and sharing lessons she learned during her groundbreaking political life.