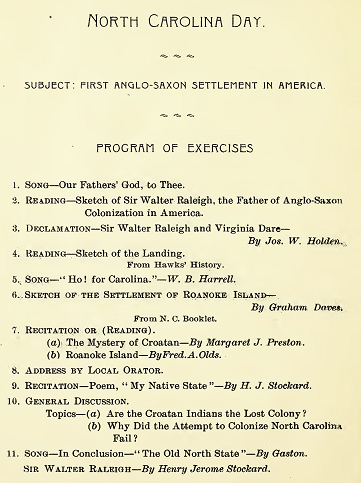 North Carolina Day was a program presented in North Carolina's public schools during the early years of the twentieth century that was designed to "awaken a proper pride in the history of the state." The state's educational system had been ruined in the financial collapse following the Civil War. During Reconstruction, the Republican government passed the Constitution of 1868, which mandated that the state provide uniform, free public schools for all children between the ages of 6 and 21. These schools were also required to be operated for four months out of the year. Despite the intentions of the 1868 constitution, North Carolinians were disinterested in public education. Taxes were not levied and four-month sessions were ignored. As a result, illiteracy in the state rose and the quality of education worsened. When economic conditions in the state improved in the 1890s, new interest in the improvement of the public schools gained support.

By 1900, state officials began to emphasize education in North Carolina, sparking other cultural interests among North Carolinians. In September 1900, a group of citizens met in Raleigh to form the Literary and Historical Association, an organization devoted to the stimulation of literary and historical activity in North Carolina. The following year, the association began to sponsor North Carolina Day in the statewide public school system, and it continued to be celebrated for the next 25 years.

The purpose of this initiative was to set aside one day out of the school year to focus on one aspect of the state's history. The Literary and Historical Association created booklets on each year's topic for the schools. During the first years of the program, the topics covered broad concepts, such as the first English settlements in America and North Carolina. The 1904 North Carolina Day focused on the Pamlico section of the state. The day's program opened with a prayer and the singing of "My Country, 'Tis of Thee." Readings and recitations covered various topics related to the Pamlico area, all of which the students were to have read and studied in preparation for the day. Topics included De Graffenreid's colony at New Bern, the Cary Rebellion, the death of John Lawson, early education in the region, and fishing in eastern North Carolina. Questions were posed of the students, and the whole program concluded with the singing of "The Old North State."

Introduction of bill establishing North Carolina Day. Journal of the House of Representatives of the General Assembly of the State of North Carolina at its session of 1901. Raleigh, N.C.: Edwards & Broughton and E. M. Uzzell. 1901. http://digital.ncdcr.gov/u?/p249901coll22,526998.