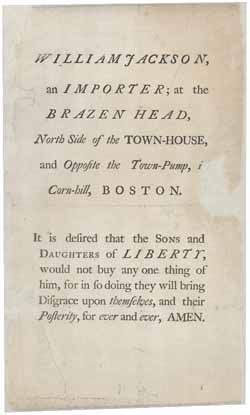 The Nonimportation Agreement (1768), which required the American colonies to purchase English goods over those from foreign lands, was a result of Britain's attempt to find new sources of revenue for colonial defense and administration. Prominent among these sources were the Townshend Acts-imposing duties on glass, lead, paper, tea, and paint-that passed Parliament in June 1767 and went into effect four months later. Most colonials found hard times during the 1760s, with money in short supply, reduced trade, and an increased cost of living. With conditions such as these, merchants and consumers alike were reluctant to become involved in a new campaign against Britain's colonial policies, and those who were willing sought more conservative means to protest the duties.

In North Carolina, attitudes toward the measures were affected by serious internal problems. The sectional quarrels of nearly three decades escalated into an east-west struggle known as the Regulator Movement in 1768 at the same time as the Townshend Acts were introduced. Before the confrontation was over in 1771, 40 people were dead, several hundred were wounded, and thousands had permanently departed the colony. To add to this human suffering and economic and political turmoil, one of the worst hurricanes in North Carolina's history struck the Cape Fear region in September 1769, leaving vast damage to crops, homes, and shipping.

It was, therefore, not surprising that little was done in North Carolina to fight the Nonimportation Agreement. Governor William Tryon dismissed the House of Commons before it could vote on nonimportation. Although the members later pledged themselves to purchase English goods, it was clear that most merchants abstained from backing the measure. Ultimately, American, and North Carolina's, imports from Britain and customs payments to the mother country declined, and the Nonimportation Agreement was largely ineffectual.

"'William Jackson, an Importer; at the Brazen Head.' An anonymous broadside notice, probably distributed in Boston in the winter of 1769-1770." Image available from the Massachusetts Historical Society.  Available from http://www.masshist.org/database/viewer.php?item_id=365&pid=3 (accessed October 15, 2012).