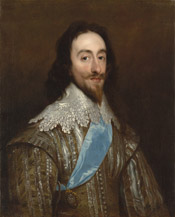 The word Carolina comes from Carolus, the Latin form of the name Charles.

In 1629, King Charles I granted territory in America to his Attorney General, Sir Robert Heath, to be named Carolina, or the province of Carolina (though later in the same charter the province is referred to as Carolana or New Carolana).

The province was to be comprised of all the land lying between "the Ocean upon the east side & soe to the west & soe fare as the Continent extends itselfe...." The northern border was to be the 36th parellel (roughly on a line from Kill Devil Hills to Knoxville Tn.). The southern border was the 31st parellel, thus extending through most of Georgia (the state border between Florida and Alabama follows this line of latitude).

In 1663, King Charles II granted a new charter to the Lords Proprietors for the same territory. Two years later, the charter expanded the colony north to 36° 30', thus reaching approximately to the current NC/Va border, and south to 29° N latitude (just south of Daytona Beach, Florida).

The Carolina colony was divided in 1710, when the Lords Proprietors appointed Edward Hyde to be "...Governour for North Carolina Independent of the Governour of South Carolina." The southern part was called South Carolina and the older, northern settlement North Carolina. From this came the nickname the "Old North State."

The first known instance of the phrase is from the Introduction to Joseph Seawell Jones' book Defence of the Revolutionary History of the State of North Carolina from the Aspersions of Mr. Jefferson. 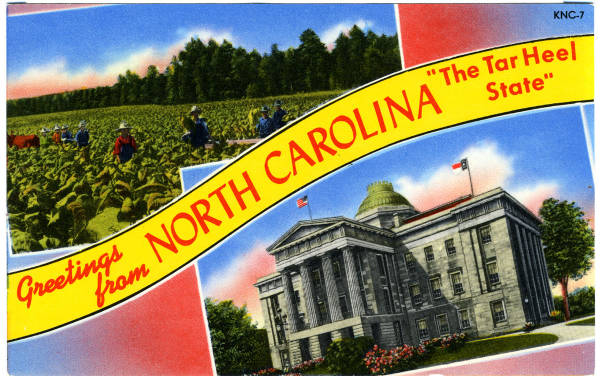 The origin of this nickname is mysterious, though most historians agree that the name derives from North Carolina's long history as a producer of naval stores--tar, pitch, rosin and turpentine--all of which were culled from the State's extensive pine forests. The historians Hugh Lefler and Albert Newsome, in their book North Carolina: the History of a Southern State (3rd edition, 1973, p. 97) state categorically that "[i]n fact, North Carolina led the world in the production of naval stores from about 1720 to 1870, and it was this industry which gave to North Carolina its nickname, 'Tar Heel State'."

Various stories and legends have sprung up to explain where the name came from. Perhaps the most popular is found in Histories of the Several Regiments and Battalions from North Carolina in the Great War 1861-1865 (edited by Walter Clark):

Thus after one of the fiercest battles, in which their supporting column was driven from the field and they successfully fought it out alone, in the exchange of compliments of the occasion the North Carolinians were greeted with the question from the passing derelict regiment: "Any more tar down in the Old North State, boys?" Quick as thought came the answer: "No, not a bit; old Jeff's bought it all up." "Is that so; what is he going to do with it?" was asked. "he is going to put it on you'ns heels to make you stick better in the next fight." (Vol. 3, p. 376)

During the late unhappy war between the States it [North Carolina] was sometimes called the "Tar-heel State," because tar was made in the State, and because in battle the soldiers of North Carolina stuck to their bloody work as if they had tar on their heels, and when General Lee said, "God bless the Tar-heel boys," they took the name. (p. 6)

While there may be no direct proof that Robert E. Lee ever spoke in such a fashion, there is at least some indirect evidence. In a letter dating from 1864 (currently housed in the State Archives and part of the "Tar Heel Collection") from Colonel Joseph Engelhard describing the Battle of Ream's Station in Virginia, he writes: "It was a ' Tar Heel ' fight, and ... we got Gen'l Lee to thanking God, which you know means something brilliant."