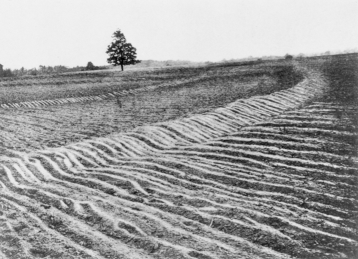 Priestly H. Mangum, a Wake County farmer, is generally acknowledged as the inventor of the Mangum terrace, a system of hillside ridges used to increase cultivatable land, conserve soil moisture, and minimize erosion, and a feature that came to dominate the agricultural landscape of the cotton South. Mangum's inspiration came from his desire to find a substitute for the hillside ditches then used for drainage in fields, which hindered the operation of a newly bought wheat binder, then very rare in his area. In 1885 he constructed his first terrace on his farm near Wake Forest. The terraces were made about two feet high and six feet deep, creating a flat depression about ten feet wide on the upslope side. The attribute of the terrace most enticing to farmers was that the whole terrace surface area could be cultivated and used for crops.

Contemporaneously, the Agricultural Experiment Station at North Carolina State College (now North Carolina State University) had been experimenting with similar ideas. As early as 1888 the station was calling for broad, cultivatable "hillside ditches." In 1896 the experiment station published a set of instructions for making the Mangum-type terrace, and their endorsement helped spread its use on farms across the state.

Other state experiment stations and the U.S. Department of Agriculture (USDA) promoted the Mangum terrace as well. In 1912 the USDA published instructions for constructing the terrace, stating that it "admirably meets the requirements of the farm for modern machinery equipment." As late as 1920, the Mangum terrace, long in use in the South, was being promoted in Missouri and others states where terracing was just beginning to be tried. The historical geographer Arthur Hall, in his study of soil erosion, found the southern piedmont to be the incubator for indigenous inventions in soil conservation such as the hillside ditch, contouring, and terraces, with little borrowing from foreign practices. To Hall, developments such as the Mangum terrace "represent distinctive contributions to the art of agriculture on the part of the region."

J. S. Cates, The Mangum Terrace in Its Relation to Efficient Farm Management (1912).