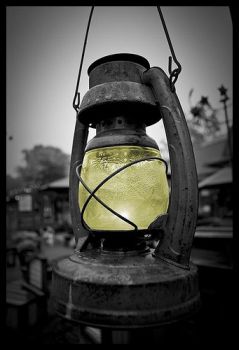 The Maco Light, also called the Ghost at Maco Station, is one of North Carolina's most well-known and enduring supernatural phenomena. It dates to a fatal train wreck in 1867 at a small rural station then called Farmer's Turnout, 14 miles west of Wilmington on the line serving Wilmington, Florence, S.C., and Augusta, Ga. Conductor Joe Baldwin, riding in the last car of a wood-burning train, discovered that his car had come uncoupled. He died waving a lantern from the rear of that car in a failed attempt to signal and stop a second train coming from behind. One witness saw Baldwin's lantern fly clear of the train wreck, land and right itself in the adjacent swamp, and burn on.

Shortly afterward and for over a century since, a flickering light has appeared regularly along the railroad tracks in the vicinity of the 1867 collision. Legend attributes this light to the ghost of Joe Baldwin, who was decapitated in the wreck; the ghost is said to be looking for its head. From 1873 until after an 1886 earthquake, railroad workers reported a pair of Maco lights that would appear together. Over the years, the Maco Light has been bright enough to fool many railroad workers into stopping their trains. To remedy the ghost's schedule-thwarting attempts, signalmen at Maco used two lights, one red, and one green. While President Grover Cleveland's train was wooding and watering up at Maco in 1889, the president saw the two signal lights, asked about them, and got the full story of Old Joe Baldwin.

In the spring of 1964, the South Eastern North Carolina Beach Association contacted parapsychologist and ghosthunter Hans Holzer to come to Maco and investigate the mysterious light. After his visit, Holzer gave an apparent certification of the phantom conductor, citing the consistency of his return appearances. Since the railroad tracks were removed around 1980, sightings of the Maco Light have "greatly diminished, if not completely disappeared," according to Cape Fear Museum historian Harry Warren. In its time the Maco Light has been the object of many a dark vigil at Maco Station, where anywhere from a few to dozens of people would frequently gather at night. It has also been the subject of numerous newspaper stories and at least one narrative ballad, "The Maco Light," which sums up the tale:

Bland Simpson and Jim Wann, King Mackerel and the Blues Are Running: Songs and Stories of the Carolina Coast (1986).