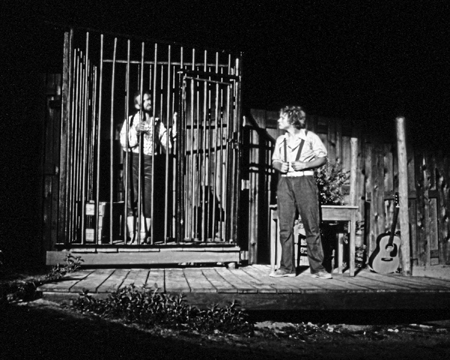 A desire for education has traditionally been a central concern of the Lumbee. Amendments to the state constitution in 1875 provided for segregated public schools but made no mention of Indians. Lumbees were disallowed from attending white schools and, consistent with their resistance of having laws restricting blacks applied to them, they would not attend schools for African Americans. Progress began with an 1885 state law, sponsored by Rep. Hamilton McMillan, that designated the tribe as ‘‘Croatan Indians’’ and provided for them separate schools, their own school committees, and the right to select their own teachers. McMillan sponsored a second law, enacted in 1887, that provided for the establishment of a normal (or teacher-training) school for the Croatans and set aside $500 for instructor salaries. Public school education began to improve in the 1920s, when the normal school had graduated several teachers. Thirty-one subscription schools (one-room wooden buildings) were built by Indians in Indian communities. By 1924 Robeson County Indian schools had a total enrollment of 3,400 students.

The growth of the University of North Carolina at Pembroke, which began as a school for the Lumbee in the late 1800s, is an important example of Lumbee educational efforts. The Lumbee have also worked for educational rights through legal activism. In the 1940s many Lumbees attempted to gain admission to colleges within North Carolina other than the school in Pembroke, and in 1972 tribal members fought to preserve Old Main, the building on the Pembroke campus that, for them, symbolized Indian education and progress. By the 1960s Robeson County had five school systems—four town systems, attended by whites and blacks, and a county system, attended mainly by Indians and blacks. Under the county’s ‘‘double-voting’’ arrangement, residents of the towns could vote for both the town and the county school boards, but county residents could vote only for the county school board. In 1972–73 the county school system had 80 percent nonwhite enrollment, but the 12-member school board was 75 percent white. After Lumbee leaders were unable to change the situation through appeals to the state legislature, they sued under the Voting Rights Act in federal court. The court denied relief, but in 1975, in Janie Maynor Locklear v. North Carolina State Board of Elections, the U.S. Circuit Court of Appeals reversed the lower court, saying that town residents could no longer vote for county school board members.

The most famous case of Lumbee activism occurred on 18 Jan. 1958 at a field near Hayes Pond, west of Maxton, provoked by two cross-burnings a few days earlier—one at the home of an Indian family in an all-white Lumberton neighborhood and the other at the home of a white woman who was involved with an Indian man. A planned Ku Klux Klan rally, announced by Klan grand wizard James W. ‘‘Catfish’’ Cole of Marion, S.C., received heavy advance publicity. The Lumbee made known their plans to disrupt the event.

The rally was attended by about 40 armed Klansmen, the county sheriff and several deputies, many newspaper and wire service reporters, and 1,500 ormore Indians armed with rifles and shotguns. In preparation, the Klan put up a large banner, a sound system, and a naked light bulb atop a tall pole. While Cole was talking to the sheriff and deliberating on whether to begin his speech, one Lumbee grabbed the light pole while another broke the light bulb. A burst of shooting began. In twenty minutes, the shooting had ended, the Klan members had run off, and the field was cleared. There were no deaths, and the only injury was to a photographer whose face was grazed by shotgun pellets. The incident received widespread publicity, with coverage in Life magazine and the New York Times.

Other violent incidents have occurred in Robeson County. During the 1980s, drug trafficking and racial violence were the cause of several unsolved murders in the county. Poor economic and educational conditions were widespread, and reports documented unfair treatment of Native Americans by the criminal justice system. Large numbers of Native Americans, blacks, and whites held mass political meetings to address these and other concerns. A coalition, Concerned Citizens for Better Government, was formed and turned out 1,500 people for a protest march on Easter Monday 1987. The group supported the candidacy of Lumbee lawyer Julian Pierce for superior court judge. When Pierce was murdered in March 1988, local law enforcement officials proclaimed the case solved as a domestic dispute four days later.

On 1 Feb. 1988 Eddie Hatcher and Timothy Jacobs, both Tuscarora Indians, held the employees of the Robesonian newspaper hostage for ten hours in order to draw attention to the county’s drug trafficking, violence, and corruption. As a condition of their release of the hostages, Hatcher and Jacobs obtained an agreement from the governor that a task force of state officials would be formed to investigate the problems. The incident brought national attention to Robeson County (although much of it was viewed by residents as unfavorable rather than sympathetic), and many positive changes resulted. The county appointed a triracial Human Relations and Unity Commission. A second Superior Court judgeship was created, and Lumbee Dexter Brooks was appointed to the position. A plan was developed to balance election districts for the County Commission according to the county’s racial percentages, and the county’s crime rate dropped. Lumbee people also attained new leadership positions. In 1992, for example, Lumbee Purnell Swett was offered the position of superintendent of the merged public schools of Robeson County. In 1994 Glenn Maynor was elected as the county’s first Native American sheriff. The Lumbee tribe has had formal governance since 2001, when it installed its first elected tribal council, adopted a constitution, and appointed a supreme court.