Christmas serenaders don't visit Rockyhock anymore, but their spirit can still be heard at David Harrell's music jamborees. Every Friday night, he hosts a crowd of country, bluegrass and gospel musicians at an old barn in this small fishing and farming community near Albemarle Sound. There is no charge to hear them, but donations and a covered dish are always welcomed.

Now 70, the former commercial fisherman still gets excited thinking about Christmas when he was a boy. During the years of the Great Depression, several groups of disguised and gaily bedecked troubadours- called "serenaders" or "shanghaiers" - used to brighten up the Christmas season.

That sort of serenading is a Christmas tradition that dates at least to English "mummering" way back before the Roman Conquest. Here it flourished most famously on the Outer Banks, at Old Christmas in Rodanthe. Bill Mansfield, a talented Greenville folklorist who introduced me to Harrell, has also heard stories of Christmas serenading in Chowan and Hyde counties up to the 1940s. Coastal slaves had a similar Christmas tradition, known as Jonkunnu, with roots in the Caribbean and Africa.

All serenaders came in the bleakest days of winter. People called it the "dying time of year, " when the fields lay fallow and nights grew so long that darkness seemed to wrap around their bones. Then, almost magically, the serenaders appeared. Singing and laughing and "cutting up, " they insisted that the human spirit could snatch joy and hope away from winter and maybe even Death itself. 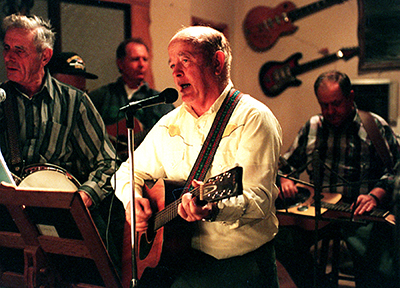 Seward, Chris. "David Harrell."  Photograph. 1999. To request permission for further use or to purchase a print, please contact the News & Observer.